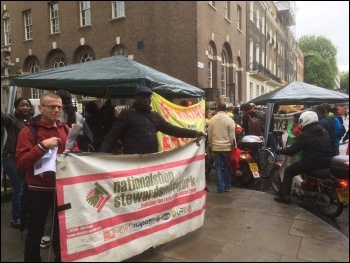 Low paid cleaners at the London School of Economics (LSE) are taking strike action every Wednesday. Members of the United Voices union, these mostly migrant workers are mounting loud and bold pickets to demand decent pay. On 17 May they marched up to Senate House, part of the University of London (UoL), to join security staff also striking. The march was noisy and bravely stopped rush-hour traffic in central London. It attracted a lot of attention, not least because marchers carried gazebos as well as banners to keep us all sheltered from the rain!

National Shop Stewards' Network supporters once again travelled from Bristol and Gloucestershire on 16 May to bring support and solidarity to BMW workers at the Mini plant in Swindon.

Workers at the German car manufacturer, represented by Unite the Union, were taking another day of strike action as part of a series of planned stoppages in defence of existing pension rights, which are under attack by the company.

Negotiations are ongoing and the striking workers seemed in a determined mood and reported that the strike was still solidly supported.

Hundreds of workers on the Crossrail project in London 'cabined up' on 22 May in dispute over the victimisation of their reps by the on-site employment agency which refuses to even recognise the elected Unite stewards and safety rep.

The action at the Holborn and Mile End sites spread to Canning Town. The main contractor on all affected sites is a consortium including the blacklisting firm Skanska.

Staff and parent campaigners took part in a joint lobby of a Stoke Newington School governors meeting on 20 May. One staff member said that the current proposals of cutting jobs and wages would not work and made no sense. They would cause long-term damage to the schools' future educational development as many staff left behind after these cuts would be likely to leave if the proposals in their current form were implemented. The current consultation document could cause up to 20 staff to lose their jobs and there would be significant wage cuts.

Campaigner Louise James said: "As parents we feel strongly about the impact of these cuts. We do not want the members of our staff to suffer cuts in pay, increased hours and worse terms and conditions. These cuts all have consequences."