Fresh faces and the fight in Labour 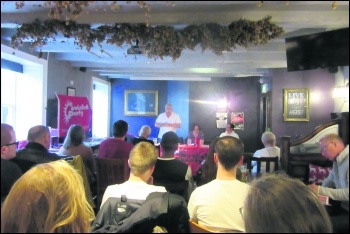 Twenty people came along to our public meeting in Newcastle, five attending for the first time, and two expressed an interest in joining the Socialist Party.

We were fortunate to have Vicki Yarrow, a Durham teaching assistant (TA), speaking too. Vicki gave a moving report of how TAs have been impacted by attacks from Durham's Labour county council, but also an inspirational account of how Durham TAs have stood together and fought like lions.

Vicki also made the distinction between the Blairite-controlled council which has attacked them, and Corbyn who has supported them.

Ken Douglas of the Socialist Party executive committee gave an account of how Jeremy Corbyn's anti-austerity policies are striking a chord with young people and workers. This is despite the treacherous backstabbing of the Blairites, and the incessant attacks from the right-wing media.

At the meeting we raised £85 for our fighting fund, supplemented by an additional £35 from people who were unable to attend.