Link to this page: https://www.socialistparty.org.uk/articles/25546 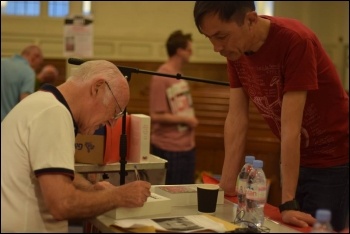 Over 100 people gathered in central london for the launch of Peter Taaffe's new book, From Militant to the Socialist Party. Attendees commented while they got their books signed by the author how timely the book was with the general election just weeks away. The book covers developments from the New Labour takeover of the Labour Party to the run-up to the world economic crisis of 2007-08, and is the sequel to The Rise of Militant.

Guest speakers from Teen Voice UK, a group of school students campaigning for votes at 16 and from One Housing Group Tenants Association, who are fighting a 40% rent rise, got huge rounds of applause and both thanked Socialist Party members for our support in their campaigns.

A number of striking workers wanted to speak at the meeting but had to instead send messages of solidarity. The chair, London Socialist Party secretary Paula Mitchell, commented on the anger of working class people in London, from the Picturehouse cinema workers fighting for the living wage to the Equality and Human Rights Commission PCS union members who saw eight members sacked via email.

There was also a message from a member of the London Bridge Three, who were dismissed after coming to the aid of a pregnant colleague and RMT member who was assaulted at work by a member of the public. Management haven't tried to find the perpetrator and instead have victimised staff who came to the woman's aid.

Over £1,600 was raised in a Fighting Fund appeal and copies of the new book were snapped up.

Closing the meeting Peter appealed for people to buy and read the book, which tracks the Socialist Party's active participation in events. It will spark debate about where the forces able to challenge and change society will come from and how a socialist world can be achieved.

This version of this article was first posted on the Socialist Party website on 27 May 2017 and may vary slightly from the version subsequently printed in The Socialist.