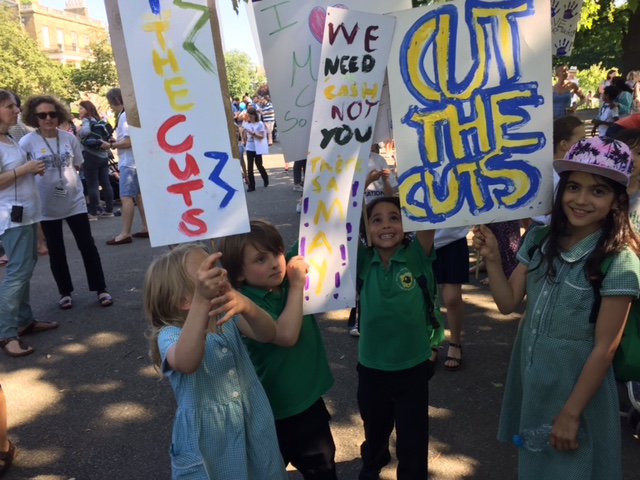 In many parts of England, education workers, parents and students have united in protest over their opposition to the Tory government slashing spending on schools. Below, are brief reports on several protest events held recently (more on fighting the schools cuts here). 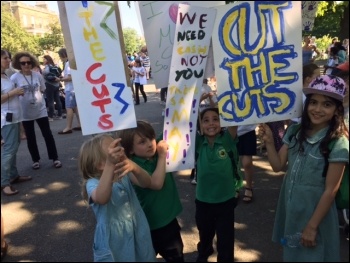 Hundreds of parents, children and teachers protested against government education cuts at a rally in Carlisle city centre on 21 May. It was organised from below at short notice when some headteachers alerted parents to the desperate effects of the planned £3 billion cuts on class sizes as schools are forced to sack teachers and teaching assistants.

All the candidates standing in the general election were given an opportunity to speak to the crowd. Carlisle’s sitting Tory MP bottled out as usual.

A Socialist Party speaker called for an increase in funding to pay for a fully free education system. Student fees should be scrapped and loans replaced with a grant, EMA and adult education courses restored.

How can we afford this? By tackling the £122 billion taxes unpaid each year by big business and the super-rich. And if they still try to get round it then we need to nationalise the banks and close down the tax havens. He finished with a call for a Jeremy Corbyn-led Labour government carrying out socialist policies.

Meanwhile, a team of socialists collected signatures on a petition against school cuts at the only stall, sold copies of the Socialist, handed out the only leaflet on the issue and held our party banner and placards high – a contribution thankfully received by the crowd and passers-by.

Parents and teachers unite against cuts

Hundreds of parents and their children marched through Southampton on 27 May. They were joined by teaching assistants, teachers, school governors and headteachers from across the city.

Called by ‘Fair Funding for All Schools‘, the protest united the forces of parents with the major education unions.

Parents spoke passionately about the need for quality education and their appreciation for the work of school staff. Parents have also responded enthusiastically to a defiant group of headteachers in the city who are setting deficit budgets, unwilling to make redundancies and steadfastly ensuring that students’ needs are met.

This stand from headteachers is an excellent example to Southampton Labour councillors, including council leader and parliamentary candidate Simon Letts who spoke from the platform. He was clearly forced to the left after a Socialist Party member’s introduction as “teaching assistant and socialist” was met with enthusiastic cheers.

Events are politicising thousands of people, demonstrated by the numbers of parents putting themselves forwards to speak from the platform for the first time to denounce the Tories and the cuts.

As part of the national fair funding education campaign, hundreds of children, parents, teachers, and support staff marched from dozens of schools across Hackney to at least seven different parks for rallies and picnics on 26 May.

In Clissold Park alone ten schools marched there to be greeted by ecstatic cheering from those already present when they arrived. At its peak there were probably 500 gathered in the park with a multitude of homemade placards.

A local parent on the platform talked about how she grew up in Hackney and how the poor-quality schools had been turned into some of the best schools. But all that progress was now under threat from funding cuts.

“I’m only 16, so I don’t get a vote. But I know what I would do if I had one, I would use it to vote out the Tories”, said Lily, a student, at a fair funding picnic in Wanstead, east London.

Her speech had an electrifying effect. Teachers congratulated her on bringing the voice of school and college students to the event.

Other speakers included teachers, parents and local campaigners fighting for funding of education services. Despite the Tory government decimating school funding, it’s clear that communities aren’t going to take the attack lying down. Unionised teachers and angry parents are gearing up for a fight. 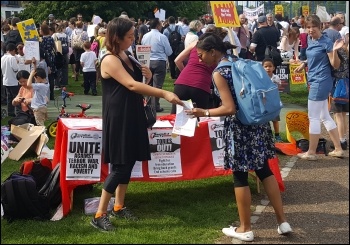 On 24 May ‘The Big School Assembly’ took place in Mile End Park in Tower Hamlets, east London. The park was soon filled with over 1,000 people demonstrating with determination against Tory government school cuts and wanting a change!

It was a fantastic demonstration of our local community’s collective strength. If these cuts go ahead, Tower Hamlets schools will lose approximately £33 million funding by 2019 – £908 per pupil and 891 teachers, according to the NUT.

Teachers from the local schools, alongside students and parents, marched into the park. They carried homemade signs and placards with slogans against school cuts and quite a few against Theresa May and the Tories.

Similar protests were called in other parts of the country too. This highlights the need for coordinated action. It also raises the necessity of the trade unions playing a central role in facilitating this.

A national demonstration similar to the one in defence of our NHS on 4 March could be equally successful and fill all campaigners with confidence to continue and escalate action in order to stop the Tories making these cuts.

500 parents and primary school children marched from schools to Walthamstow Town Square on 26 May to protest against the threat of losing 500 teaching staff in Waltham Forest, north east London.

This is despite, as the local National Union of Teachers branch pointed out, the council having £70 million in reserves.

There was a determined and angry mood, which even induced right-wing Labour MP and candidate Stella Creasy to lead the chanting of “No ifs! No buts! No education cuts!”

Come 9 June, parents, students and education workers will see if Creasy will still be cheering the campaign, but they and the trade unions must organise to fight back against the threat to education in the borough.