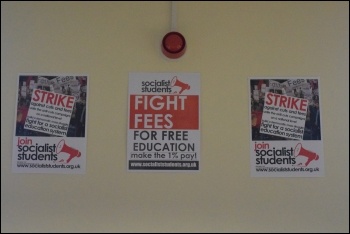 On 24 May, a meeting of students was held at Chelsea College of Arts to discuss a plan of action to oppose a 'restructure' of University of the Arts London (UAL) colleges at Camberwell, Chelsea and Wimbledon (CCW).

Faced with huge cuts to workshops, courses and staff, we decided to occupy a space at Chelsea. Ten people from across CCW, the Arts Students Union, UAL and other students acting in solidarity, secured the space and occupied overnight.

The following day we were met with hostility and aggression by security staff, who would not allow fellow students to pass us food. Security physically blocked students from entering the occupation, grabbing one student.

We were unable to exit the room to use facilities and re-enter the occupation, as more and more security staff were brought in and a metal barrier was placed around the door.

Despite being unable to let more people in to occupy, we received huge support from those outside - including anonymous messages of support from workers at UAL and banner drops orchestrated by fellow students.

The planned restructure was first brought to our attention in a recent video sent out to students by Pro-Vice Chancellor David Crow outlining his 'vision' for the three colleges. Most worryingly he stated that my university, Chelsea, will be about 'international markets'.

The video gives a glossy, corporate insight into the plans to change the universities without student or staff knowledge or input.

Eight fine art research staff have been made redundant, and university management has been emailing all staff offering 'voluntary redundancies'.

This has created an atmosphere of fear among staff, who are scared to speak against the cuts for fear of losing their jobs. Many are on rolling contracts, effectively zero-hour contracts, with little job security. Still more staff have been left in the dark about the changes.

Due to the difficult conditions of the occupation, we decided to end 24 hours after we started with a statement, after speaking to management and securing a two-week extension to the decision to cut any jobs.

We will continue to take direct action against these cuts as well as negotiating to save jobs and facilities for all future students and staff.