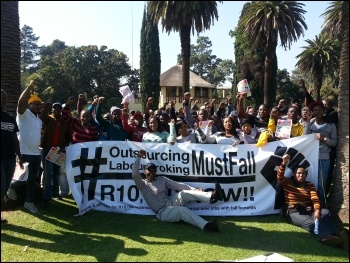 The constant smoke from wood fires, as township residents attempt to keep warm from the freezing winter nights in their flimsy tin shacks, is just one of the reasons for the night-time smog surrounding Johannesburg.

The other reason is the flames of class struggle that are burning across the townships of South Africa in protest at the failure of the corrupt African National Congress (ANC) government to address the grinding poverty and inequality that not only still exists - post-apartheid - but is actually widening.

Community protests around the lack of progress in building new homes to replace the thousands of informal settlements, and the lack of basic service delivery such as access to water, electricity and refuse collections, have taken place regularly in black townships since the ANC government came to power in 1994.

But the latest protests have become more violent and are spreading to townships of communities historically classified as 'coloured' by the apartheid regime (including those of mixed-race descent), such as Eldorado Park (Eldo's), which is adjacent to Soweto in Johannesburg.

The roads of Eldo's still bear the marks of the violent protests that took place earlier this month which left residents prisoners in their own community.

Burning road blocks on the highway and main arteries in and out of Eldo's prevented any movement, allowing looters to raid and burn down stores, warehouses and petrol stations.

The media initially claimed these protests were a result of alleged discrimination against the coloured community of Eldo's over the preference given to neighbouring black townships in the building and allocation of housing.

The shortage of housing remains a massive problem with some two-bedroom flats in Eldo's accommodating 27 occupants. However, such conditions are not unique to Eldo's but are also prevalent in many black townships as local Workers and Socialist Party (Wasp - CWI South Africa) members pointed out in a community meeting following the protests.

According to residents, it was not just the housing issues that sparked the protests but the acute social problems in the township, especially the rise in drug and alcohol abuse and the increasing violent attacks on women which the police ignore. This was grotesquely confirmed a few days later when a woman was shot dead in a botched carjacking.

Our Wasp members who are residents in Eldo's are playing an important role in organising community action, with concrete demands that can offer a real alternative and undermine the criminal element who have used the justifiable anger of the community to further their own agenda.

As well as convening future action meetings to pressure local, regional and national politicians, steps are also being taken to link up with other townships across Johannesburg. The ultimate aim is to establish a national federation of community campaigns , armed with a socialist programme to deliver the homes and services so desperately needed.

The increased levels of violence, the blocking and burning of tyres on roads and the burning down of buildings are starting to become more common as 'normal protests' are ignored by the authorities who only seem to respond when the flames of anger are burning high.

Unless counteracted with united action under a socialist programme this tendency could develop further, even in the trade union struggle.

An #OutsourcingMustFall (OMF) strike meeting in Pretoria recently voted for strike action, protesting over management at the Twashane University of Technology (TUT) reneging on its promises of full-time contracts for outsourced workers.

Led by Wasp and OMF activists, thousands of unorganised workers are being organised into the trade union movement - including the TUT workers, who won significant victories which management now wants to claw back.

The leadership has led a determined campaign to defeat such attacks but the dangers of an angry and frustrated workforce were shown when one of the affected workers asked who was bringing the tyres to the picket line!

This comment, dismissed by the leadership and members, nevertheless shows the urgent need for a political alternative to the bankrupt ANC.

The recent launch of the South African Federation of Trade Unions (Saftu) - a new trade union federation following a split in the Cosatu federation with supporters of Jacob Zuma (the country's president) - has the potential to assist in the creation of a new mass workers' party.

This is despite attempts by the Numsa (metalworkers' union) dominated leadership of Saftu to make the new federation 'politically independent but not apolitical' after the experience of the ANC-dominated Cosatu.

However, when a leading Wasp member (as a delegate from OMF), addressed the launch conference demanding that Saftu urgently proceed in creating a new mass workers' party in preparation for the 2019 general election, he was loudly and enthusiastically applauded by the vast majority of rank-and-file delegates - particularly those from Numsa.

All these issues were discussed and debated at the recent Wasp national committee - where delegates from Eastern Cape, Cape Town, Bloemfontein, Limpopo, Johannesburg and Pretoria grappled with the strategy and tactics necessary to intervene in the mighty class battles taking place and the building of Wasp across the country.

Despite the enormous amount of work on the shoulders of the leadership of Wasp, its international outlook and approach was to the fore in all discussions. In particular its awareness and support for the 'Jobstown Not Guilty' campaign in Ireland - sending solidarity under the banner of 'Protest is not a Crime (even in South Africa)'!