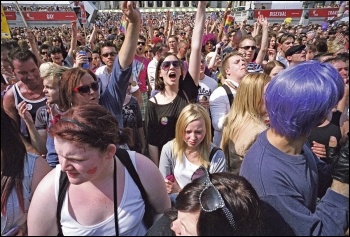 Lesbian, gay and bisexual people in Britain are reporting lower personal wellbeing than straight people in all areas measured by the Office for National Statistics.

The annual population survey shows LGB people have lower feelings of happiness, life satisfaction and things they are doing in their life being worthwhile, along with significantly higher feelings of anxiety.

These findings should come as no surprise. LGBT+ people are still experiencing oppression and the impacts of homophobia, biphobia and transphobia in their daily lives. This includes bullying and harassment in school or at work, and problems with access to healthcare.

The situation is certainly not helped by the Tories' and Blairites' agenda of cuts and privatisation. Services important to LGBT+ people - such as HIV services - are being slashed. Housing becomes harder to find. Jobs and wages are constantly under attack.

Jeremy Corbyn's proposals to start reversing cuts and privatisation and tackling the housing crisis could make a huge difference to LGBT+ people.

These findings show that - as important as legal protections and reforms are for LGBT+ rights - they are not enough to end inequality on their own. Homophobia, biphobia and transphobia in society must be fought with united action in LGBT+ communities.

But we must also fight alongside the working class as a whole to ensure everyone has access to a real living wage, secure jobs or benefits, decent housing, free healthcare, and all other vital services. Only this can ensure that LGBT+ people - and everyone else - can improve their personal wellbeing.