Link to this page: https://www.socialistparty.org.uk/articles/25585 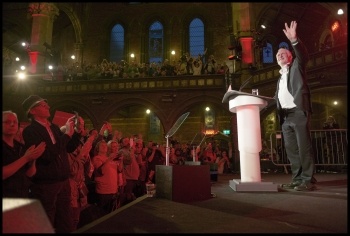 Around 1,000 people gathered in the glorious sunshine at Rivermead Leisure Centre in Reading on Wednesday 31st May to listen to Jeremy Corbyn speak. This was arranged at very short notice and not in a central location, so the turnout was therefore all the more encouraging.

Among other things, Corbyn highlighted his commitment to ending zero hour contracts and to providing employment rights from day one. He also confirmed that a Labour government under his leadership would no longer charge for employment tribunals.

He highlighted the difficulties for people with family members who have mental health issues. He reiterated the improvements to social care and mental health services that are part of the much needed policies in his manifesto to protect and fully fund the NHS. These and all of his pledges received massive applause from the enthusiastic crowd.

There was a really positive vibe and a sense that people were open to socialist ideas. This was reflected in the sale of 88 copies of the Socialist, thanks to the 10 dedicated Socialist Party members who turned up at short notice. Many more people received leaflets advertising our own pre-election rally this Sunday in support of Corbyn (details below).

The Reading and Bracknell Socialist Party branch has been consistently campaigning against cuts to local services for a number of years and is the only left group locally putting forward a socialist alternative at every opportunity.

We have embraced Corbyn's leadership from the start and support any reforms that will improve the lives of working people. It is really uplifting to see the hard work pay off and the increased interest in our party locally. We look forward to the coming period of increased political consciousness and determination of people to fight for a better future. We will continue to play a key role within this movement!

Rally for Socialism: Tories Out! Corbyn In!

This version of this article was first posted on the Socialist Party website on 1 June 2017 and may vary slightly from the version subsequently printed in The Socialist.