Link to this page: https://www.socialistparty.org.uk/articles/25588 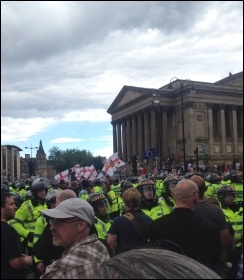 The tiny EDL demonstration surrounded by a protective ring of police, 3.6.17, photo by Liverpool Socialist Party   (Click to enlarge)

The far right was once again completely humiliated in Liverpool on 3 June.

The racist English Defence League (EDL) had attempted to march through the city, attempting to whip up hatred in the aftermath of recent terrorist atrocities. They gave no real reason for the march except taking on what the EDL called "leftie antifa land," hoping the third time would be different to their last two attempts in recent years.

That backfired. A national mobilisation could only gather 30 to 40 hardened EDL racists, countered by over 1,000 anti-racist protesters, made up of working class people, young and old, bolstered throughout the day by passers-by who wanted to play a part in stopping the EDL.

Confusion caused by the police, who initially tried to kettle the counter-protest, allowed the EDL to leave the pub where they had assembled and begin their march - albeit down a back street. They could have been prevented from doing even this - but nonetheless, they did not march more than 200 yards before they were stopped dead in their tracks. 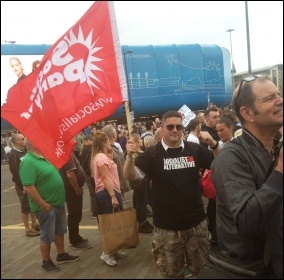 The police massively outnumbered the EDL by as many as ten to one, and were determined to allow them to march their planned route, a ridiculous mile-long march directly through the city centre. Police often seek to facilitate far-right marches, officially in the name of 'free speech', but in reality to intimidate ordinary people and discourage them from taking part in demonstrations.

The size and determination of the counter-protest, including groups of protesters lying down in front of police horses, made sure the EDL was instead taken back to the train station and bundled out of the city, completely humiliated and embarrassed yet again.

Its small numbers show how fractured and insignificant the EDL has become, and how little echo its ideas have in society. However, that is due to the continued resistance they have faced whenever they try to organise, despite the whipping up of racism and division by pro-capitalist politicians and the right-wing press.

The report in the Sun newspaper, rightly boycotted throughout Liverpool, was widely shared by the EDL for presenting an 'alternative reality' version of the day. It implied counter-protesters were violent and sailed close to tacit endorsement of the EDL itself.

The Liverpool Echo initially reported that the EDL was only stopped after completing its planned city centre march - although has now corrected this after we contacted them. The reality is that the EDL was stopped and turned back by a mass protest of mainly working class people. 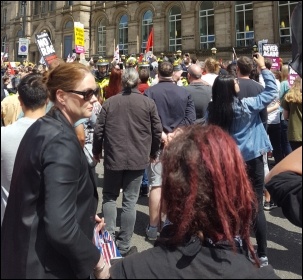 Some of the 1,000-strong counter-demonstration against the EDL in Liverpool, 3.6.17, photo by Liverpool Socialist Party   (Click to enlarge)

The Echo also praises the role of Blairite Mayor Joe Anderson in standing up to the far right, despite him being responsible for the austerity that creates the miserable conditions where the far right can thrive. None of the 20 Socialist Party members present saw Anderson on the day.

Working class people have the power to stop the far right, and to build a mass campaign to end racist division and its causes. There was large and visible support for Jeremey Corbyn on the demonstration, including chants of his name. This shows there is a mood to go beyond protest - to build a movement to rebuild jobs, homes and services, and fight for a real alternative to austerity, terrorism, racism and war.

The demonstration could have been much larger if organised by the trade unions, which also have a key role to play in stewarding and protecting such protests. The unions must look at the needs of local communities to organise a defence against the violence and bigotry propagated by groups like the EDL.

Good work for a mere three hours - and another complete defeat for the EDL.

This version of this article was first posted on the Socialist Party website on 6 June 2017 and may vary slightly from the version subsequently printed in The Socialist.