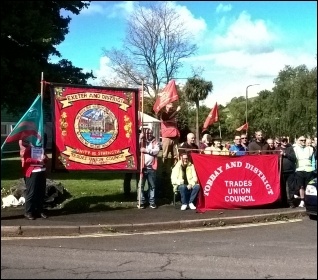 Socialist Party members visited the picket lines at Sierra Glass in Paignton on 5 June and showed the strikers the previous report in the Socialist. It was handed around and read enthusiastically in the nearby café and I was repeatedly told: "This is the best and most accurate account of the dispute so far."

Workers were particularly pleased we had highlighted that there had been no pay rise since 2008 as this is not being mentioned elsewhere. To reinforce the point I was introduced to a striker who had been there for 30 years and was still on the minimum wage.

The mood on the picket line is still good, especially as workers at a sister company, DB Glass, in nearby Newton Abbot are now also joining the strike.

We believe it is essential that direct links are made by the strikers at both plants and have offered to help. We also suggested that the workers form a strike committee.