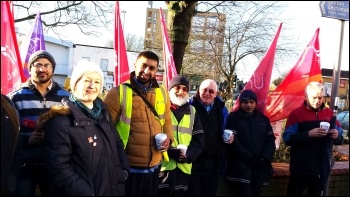 A theme of the 2017 general election was insecure and precarious work. International multi-billion pound company Procter and Gamble has a long history of union-busting which creates these conditions.

That continues today in its UK operations. As part of its cost-cutting strategy it retains the services of numerous agencies.

Agency workers report to the Socialist that they're treated as second class, singled out for enhanced scrutiny, and excluded from benefits like bonus and pension schemes, discounts, healthcare, sickness pay, and use of gym facilities.

Valuable agency workers are constantly reminded of their second-tier status, with no rights and no opportunities for advancement. Proctor and Gamble pay top prices to long-term contractor and agency fatcats, while workers providing valuable services receive a derisory fraction.

Agency workers say: "This is demoralising and hard to accept. We're also precluded from addressing our concerns to the company directly.

"This means that problems go unresolved, creating stress and tension in an already difficult environment. We have joined Unite the Union, and look to link up with other Proctor and Gamble agency workers across Britain."