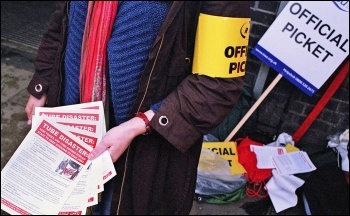 Want a pay rise? Join a union. That's the message from recently published government data showing that being in a trade union increases pay for the majority of workers.

In particular, unionised women earn 27% more on average than their non-union counterparts, while membership boosts pay by 20% for workers aged 16-24.

Meanwhile the Tories are still desperately trying to peddle the line that trade unions are no longer relevant! The reality of austerity Britain is that they're more relevant than ever.

Secure jobs with decent pay were only won in the first place by workers organising and fighting for them. The trade union movement still has that power today. The time is not to defend what we have, but to fight for a greater share.

The Trade Union Congress backing for a £10 an hour minimum wage raised the sights of many low-paid workers. It became a central goal in Jeremy Corbyn's manifesto.

The turnout of young people for Corbyn's anti-austerity policies was the take-home message of the general election, but many young workers are not unionised.

The trade union movement must urgently recruit and organise this politicised layer of youth, and show them we don't just have to wait for elections. As a start, the unions should call a mass demonstration against the weak Tory minority government, and for a Corbyn-led, anti-austerity administration.

Workers have the power to change things for ourselves. Let's use it.