Grenfell - a monument to this rotten system

The horror of the Grenfell Tower fire - in the area where I was born and where my sister still lives - has left me sad but also very angry.

I grew up there in a squalid slum, four families sharing one bathroom, an outside toilet and no hot water. It was one of the poorest areas in the country. A mile up the hill lived some of the richest people in the world.

Lancaster West (where Grenfell Tower is) and Kensal New Town estates were built to clear awful slums, I remember them being built. But locals said at the time that they were just building new concrete slums.

I joined the Labour Party Young Socialists and Militant (now the Socialist Party) because of my class hatred for the system which benefited the rich and condemned us to poverty.

Grenfell Tower is a monument to decades of cuts under Thatcher, Blair, Cameron, etc. It is a man-made disaster, a slaughter of working class people, killed because of the quest for corporate profit.

It is 40 years since I left that area yet North Kensington/Notting Dale is still one of the poorest areas in Britain - nearly 60% child poverty - while the super-rich still live at the top of the hill and are even richer.

Don't get angry, get even. Let's ensure that those responsible for these deaths are jailed. But also it is the whole rotten system of capitalism that's to blame.

Let's sweep away this system and build a new socialist order, based on the type of human solidarity that the people of North Kensington have shown in response to the deaths. 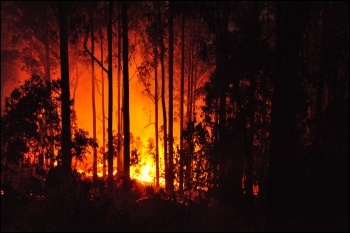 More than 60 people dead in a huge forest fire in Portugal. They say it was unforeseeable and unavoidable, but year after year these tragedies are repeated.

Fire and emergency services have been depleted and cut to the bone through years of austerity, with brave firefighters being left to fend for their communities with a surreal lack of resources.

The lack of agrarian reform has left vast swathes of rural areas in the hands of private interests which are only about profit, not about maintaining and taking care of the forest to avoid this.

Every year tragedies like this happen in Portugal and we mourn the firefighters and ordinary people that perished and lost everything to the flames.

Solidarity with the people of Pedrogão and Figueiró, and with all the firefighters currently fighting the blaze. No more cuts in fire, emergency and civil protection services. 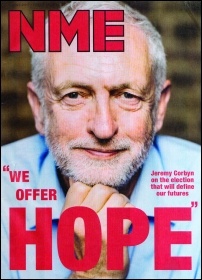 "The landscape of politics in the UK has changed for ever" is how the editorial in the NME describes the situation in Britain after 8 June. "Sometimes defeat can feel like victory... a new hope spread across the UK".

The main cover of the previous issue had a kindly and confident Jeremy Corbyn looking into the camera and the words: "We offer hope". In that issue, the editor-in-chief, Mike Williams, admits to having changed his mind about Corbyn. Among other things, "his silence during the Brexit campaigning annoyed me".

But "when he calls for a better funded NHS and more support for teachers, and says he's scrapping tuition fees and zero-hour contracts, he's promising us exactly what we want: a fairer and more inclusive country".

The post-election edition declares: "Two-thirds of young voters moved to reject the establishment - no wonder they're calling it a 'youthquake'".

In the pre-election editorial, Mike Williams quotes Bob Dylan's famous warning that "the times they are a-changing!" For some of us in the older generation, we can only greet with enthusiasm the "youthquake" and look to a far brighter future to follow, as the new generation takes up the struggle for socialism.

Watch 'The Handmaid's Tale' (Channel 4) if you get the time. It is a dystopian vision of a DUP-style government transferred to an American context. Yet the original Margaret Atwood book was written in the 1980s. Prescient fiction or a warning?

In the series, the religious right have seized power using terrorism as a pretext. Jack London's book 'The Iron Heel' warned against this possibility.

Moreover the Nazis used the burning of the Reichstag as just such a pretext. I won't give any more spoilers. Just watch it and see how a patriarchal homophobic agenda works out in practice.