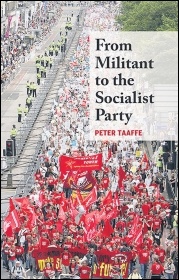 'From Militant to the Socialist Party' by Peter Taaffe, photo (Sarah Sachs-Eldridge)   (Click to enlarge)

"Well I have finished it! I have completed reading the marvellous book From Militant to the Socialist Party. What an absolutely brilliant read, remembering some of the events I was involved in.

"From Militant to the Socialist Party is a lesson on building a Marxist socialist organisation on the one hand and continuing to raise the ideas of socialism in the wider working class movement on the other. I recommend all Corbynistas read this biography of a socialist tendency that has developed a powerful base in the British workers' movement over the past 53 years.

"Also read the first volume in this trilogy, called The Rise of Militant, to understand that the building of socialist ideas cannot be relied on enthusiasm alone, but needs concrete socialist policies and organisation to defeat British, European and world capitalism."

"I have just finished reading Peter Taaffe's brilliant and stimulating book From Militant to the Socialist Party. At times, I was deeply moved, as Peter carefully and lucidly took me through his fascinating and knowledgeable experiences.

As a new member of the Socialist Party, many of my questions were answered and the book confirmed my feelings of despair and disillusionment with New Labour and its politicians.

The style, print and short chapters all helped me to read and understand very clearly the political beliefs and progress of the Socialist Party in relation other political parties and international socialism. My hope for a brighter future is restored."