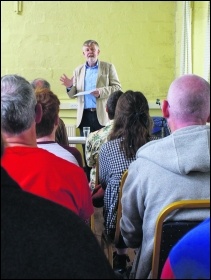 On 25 July 40 people gathered in the village hall in Pentrich, Derbyshire, to mark the 200th anniversary of the Pentrich Rebellion. The excellent meeting, organised by Mansfield Socialist Party members, was followed by a choice of walks to discover more of the village's remarkable history.

We were honoured to be joined by a relative of one of the hanged rebels, Isaac Ludlam. She, in turn, spoke about how proud she was to be a descendent of his.

The 200 or so workers who marched to Nottingham in 1817 were determined to bring down Lord Liverpool's Tory government and improve their own poverty-stricken lives. Agent provocateurs and light dragoons, however, made sure that fate by hanging, imprisonment or transportation was assured.

200 years later, the ruling class is terrified of the huge power and strength of the working class when it is united. This weak, split and in-fighting Tory government can and must be brought down.

A Labour government led by Jeremy Corbyn could deliver immediate improvements in people's living standards, and show what could potentially be achieved in a socialist society, which is the ultimate goal.