Trade unions must organise mass movement to kick out the Tories 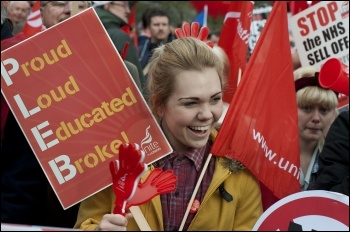 The general election result has not only confounded the Tories and the Blairites but also many trade union leaders.

It has been reported that, at the beginning of the campaign, Trade Union Congress (TUC) general secretary Frances O'Grady expected Labour to be "where the Tories were in 1997", on the receiving end of a landslide defeat.

Incredibly, she tweeted: "Promising set of commitments from the Conservative Party pledge to expand workers' rights". This implies she was looking to build a partnership with an expected strengthened Theresa May government.

Many of the union leaders have completely misread the political and social situation and drew only pessimistic conclusions. They have a one-sided analysis of record low union membership and strike figures and don't see below the surface the raging anger against Tory austerity and the management offensive in the workplace.

Just in the last month or so, Royal Mail workers in four different areas covering 12 offices have walked out in unofficial action against the victimisation of the their Communication Workers Union reps.

Of course, the right-wing union leaders conveniently forget the role that they have played in opening the door to the massive cuts offensive.

The decision of the leadership of the TUC, and the Unison and GMB unions, to effectively end the 2011 public sector pension struggle just weeks after the two-million strong 'N30' strike, gave Cameron and Osborne confidence to crank up the attacks. The growing joint pay dispute in 2014 was also allowed to peter out.

But some signs were far more visible. A big number of the 45% who voted for Scottish independence in 2014 did so for anti-austerity reasons.

Even the pro-EU Labour shadow minister Keir Starmer recognised the anti-establishment element that was part of the Brexit vote. And, of course, Jeremy Corbyn's election as Labour leader and his re-election last summer was a reflection of this mood.

Starmer made his comments at a fringe meeting at Unison conference, where the overwhelming mood of delegates was one of huge support for Corbyn and 'the Tories are on the ropes, one last heave can get rid of them'. It's clear that the new, more favourable balance of forces that has resulted from a weakened Tory administration has given some workers a boost of confidence and a feeling of 'now it's our turn'.

And now workers will be asking: "If the Tories can find £1 billion from their 'magic money tree' to do a deal with the DUP, why can't we have a pay rise or why can't the cuts be stopped?"

Even the TUC has been forced to recognise this mood, especially against the catastrophic decline in living standards from seven years of Tory pay restraint, and has called a 'Britain still needs a pay rise' rally in central London on 17 July.

We welcome this initiative if it launches a serious struggle, although we think the TUC and the unions should have played the central role in the 1 July demonstration, rather than sub-contracting out to the People's Assembly. In any case, union leaders who speak at the demonstration should use the platform to build for the pay rally and the industrial action that will be necessary against the Tories.

The TUC rally and 1 July demo have to be used to launch a mass campaign in the public sector to break the 1% pay cap. Even the RCN nurses' union, which has been historically opposed to strikes, has voted in an indicative ballot for action on pay.

91% of members would take industrial action short of strike, with 78% saying they were prepared to strike. The RCN now says that unless the Tories end pay restraint, it will ballot for strike action.

No doubt some unions will argue that the Trade Union Act, with its higher undemocratic voting thresholds, makes national strike action impossible. We certainly don't underestimate its effects but a serious mass campaign is the only way to get the vote out. Although ultimately, even some of the more far-sighted Tories recognise that anti-union laws can't always contain workers' anger.

While we don't take defying these laws lightly, it will be posed at a certain stage and would leave the government powerless. 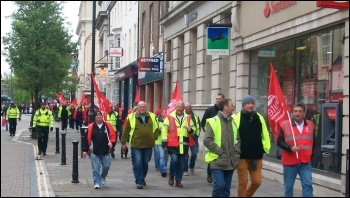 There is also the potential to reach out to workers in the private sector who are also under the cosh on pay and pensions. This year has seen workers in BMW and the Atomic Weapons Establishment on strike to defend their final salary pensions.

Although, in some public sector unions, pay may not be the most important issue at the moment. The teaching unions are facing down the funding crisis in schools, while many health workers see the £22 billion NHS cuts through 'sustainability and transformation plans' as the priority.

And any campaign has to incorporate these threats. Similarly in other sectors, workers have taken action against office closures in the civil service and to stop driver-only operation on the trains.

But pay can often act as a lightning rod for all the many other grievances that have resulted from the cuts.

In the week after the 1 July demonstration, Unite members at British Airways and in the Barts Health Trust will be on strike. Both involve low-paid workers who have been pushed over the edge by grinding poverty.

The election result reflected the huge turmoil in society but most of all a desire to throw off the chains of austerity. The prospect of a Jeremy Corbyn-led Labour government that workers will hope totally changes their lives could be just months away.

But that mood has to be mobilised in a serious mass movement to push the Tories out.