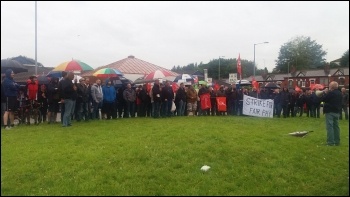 Striking Mears workers in Manchester holding a protest outside Northwards housing association offices on 23 June chanting "what do we want? Pay parity. When do we want it? Eleven years ago!"

Mears employees earn up to £6,000 less than workers on the other side of the city. Unite the Union is looking to step up the dispute, regularising strike pay and moving to involve other Mears staff who maintain the council's own premises, including the iconic Gothic town hall.