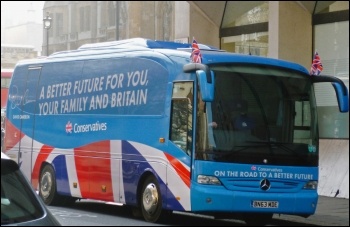 It's been revealed that the Tories may have broken electoral laws with the use of so-called 'market research' company Blue Telecoms.

It has been reported by both Channel 4 News and the Guardian that Blue Telecoms used a script in the run up to polling day which appeared to canvass for support in a number of marginal constituencies rather than simply conducting market research.

Also, earlier in the campaign Channel 4 News reported that Blue Telecoms staff were claiming to be calling from 'Axe Research', a company which doesn't appear to exist. This would be a violation of the Data Protection Act.

This comes just weeks after it was confirmed that the Tories had overspent on their 2015 election expenses. On that occasion the Tories escaped without charge as the Crown Prosecution Service would not be able to decisively prove whether or not the overspend was down to "human error" as claimed by the Tories.

Whether Blue Telecoms did or did not act illegally, this latest scandal draws attention to the fact that the Tories are having to rely on market research companies as part of their election strategy.

This suggests they lack a genuine support base and party activists to carry out an election campaign which would come close to matching the people-powered campaign conducted by Jeremy Corbyn.

This scandal is yet another problem for an already beleaguered minority government which has shown itself to be anything but strong and stable, which will only further fuel the growing calls for Theresa May to resign.