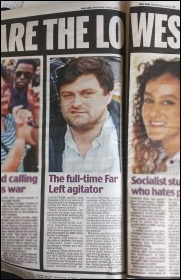 Fanatical right-wing gutter rag the Daily Mail ran a piece on Socialist Party London organiser Paul Callanan on 21 June. Its print headline: "They are the lowest of the low."

The "full-time far-left agitator" stands accused of... writing to unions and campaign groups. Paul had invited them to a protest against the Queen's Speech and the Tory minority government.

He wrote "we would like for you to join us and make it a real show of strength. Please also mobilise, bring banners and make as much noise as possible."

Responding to the article, Paul tweeted: "The 'Lowest of the low' eh? Coming from the Daily Mail that really is quite the compliment"!