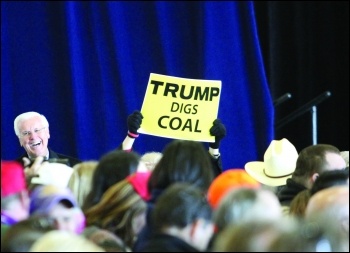 On 1 June 2017 the world's TV cameras broadcast live, as President Donald Trump announced that the United States will withdraw from the Paris agreement. Lengthy applause and whoops of delight arose from the audience gathered on the White House Rose Garden lawn.

The Paris agreement, drawn up in 2015 by the United Nations, is a feeble attempt to mitigate the effects of climate change on the world.

Trump's spoilt schoolboy pout appeared on news channels globally - he was going to 'make America great again', this time at the expense of the earth's climate. He championed the greed of the US fossil-fuel industry capitalists at the expense of every other nation on earth. Meanwhile, our planet warms, ice sheets melt and seas rise.

Trump then said he intended to "begin negotiations to re-enter either the Paris Accord or a really entirely new transaction" - an empty promise from a president who has tweeted climate change scepticism 115 times. The Vox media website immediately reproduced every tweet.

A Bloomberg news correspondent noted that the withdrawal from the Paris agreement will help foil legal challenges as the Trump administration eviscerates the US Environmental Protection Agency.

Trump avoided giving explicit support to the thin soup of climate change denial with its floating lumps of fake news. Where was the ideological offensive against the science of climate change itself? Why no fake claims about growing glaciers, robust arctic and Antarctic ice sheets? Or talk of storms on the surface of the sun heating the earth?

The evidence of manmade global warming is so overwhelming that perhaps Trump's advisers warned against courting ridicule (see below - 'Climate change: the evidence is in'). Even his daughter, Ivanka Trump, assistant to the president and now a fully signed up member of the US oligarchy, was said to have argued against withdrawal from the Paris agreement!

The Paris framework agreement allows each nation complete freedom to decide its own terms, financial or otherwise. So how is it remotely meaningful for Trump to talk about "negotiations to re-enter" the Paris agreement? Or to claim a "$3 trillion" cost to the United States by 2040?

The Paris agreement does not even make a ruling on limiting coal production, the "single greatest threat to our climate," according to environmental group Greenpeace.

The fake news of Trump's announcement was based on concealing these facts. "China will be allowed to build hundreds of additional coal plants. So we can't build the plants, but they can," the president said. Fake. "This agreement is less about the climate and more about other countries gaining a financial advantage over the United States." Fake. "I was elected to represent the citizens of Pittsburgh, not Paris." Pittsburgh voted for Hillary Clinton, the mayor of Pittsburgh protested!

But beneath the fake news of the oligarch's rhetoric, his attacks on China and India reveal some important truths. It is precisely the capitalist competition between the USA and other nations - China in particular but also India, Brazil and Russia - which prevented the Paris agreement from taking on any flesh. (See below: 'Can free market capitalism save the planet?')

The deeply flawed Paris agreement is nothing but "a fraud, a fudge without action, just promises" according to James Hansen, 'father of climate change awareness' and head of the NASA Goddard Institute for Space Studies.

Fuelled by opposition to Trump and his pro-fossil fuels and environmental deregulation policies, 'March for Science' demonstrations were held worldwide on Earth Day, 22 April. Organisers claimed more than 600 satellite marches took place globally. Thousands gathered in London, many protesting against a trend "among politicians for discrediting scientific research" the BBC reported.

Climate change: the evidence is in 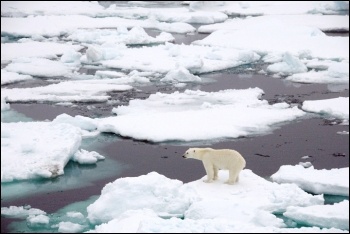 The ice is melting in our warming planet. Arctic sea ice expands in winter but on 7 March this year it reached its lowest maximum extent in the 38-year satellite record. The previous summer's September low shared second place in the lowest ice extent, and this year could be record breaking. At the current rate - if it does not accelerate - there will be no arctic ice in September 60 years from now.

The shrinking arctic ice affects the UK's climate because it causes wild swings in the polar jet stream. The UK has been pounded by severe storms and in the US, deadly summer heatwaves and torrential floods have been linked to the distorted polar jet stream. The earth's agriculture relies on a stable climate - global warming is destroying crops around the world, leading to forced migrations and conflict.

The Antarctic will not disappear so quickly as the arctic ice, but it is here (and on Greenland) that the melting land-based ice is raising sea levels. The day before Trump's announcement, scientists announced that a rift in the Larsen C ice shelf now stretches 193km.

When it breaks off, any day now, it will create one of the largest icebergs ever seen. It would stretch from Cardiff to Tenby - almost the entire south Wales coast line - and would reach 50km inland at its widest. Once it goes, the rest of the ice shelf will likely follow, as have Larsen A and B before it.

While the floating iceberg won't raise sea levels, the collapsing ice shelf allows the Antarctic glaciers to more freely flow into the sea, raising it in the next few centuries or so by 60 meters, greater than the height of Nelson's column.

Global warming science is not and has never been genuinely in question. Yet this is the future Donald Trump is bequeathing our children.

Can free-market capitalism save the planet? 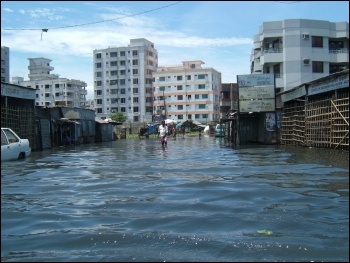 As far back as 1946, leading oil companies in the USA created a Smoke and Fumes Committee which backed scientific research - but only in order to "prevent environmental regulations they deemed hasty, costly, and unnecessary," the Centre for International Environmental Law (CIEL) discovered.

The CIEL, which published an expose into oil industry disinformation last year, is investigating whether ExxonMobil engaged in a cover-up to mislead the public, reports Joe Romm of Climate Progress.

In 1957 ExxonMobil published a paper showing evidence of global warming due to CO2 emissions. Yet, in subsequent decades, in a twist of Frankenstein monster proportions, Exxon has spent more than $30 million on think tanks that promote climate denial, according to Greenpeace.

Trump appointed former Exxon chief Rex Tillerson as US secretary of state. Throughout his speech, Trump argues that the Paris agreement is an "agreement that disadvantages the United States, to the exclusive benefit of other countries." For United States, read 'US capitalism'.

Is it possible that the world's capitalist leaders can negotiate to avoid climate change? Can we have faith in the 'invisible hand of the free market'? The short answer is no. Capitalism generates a flea market of climate scepticism. It is cheaper to individual companies - and capitalist countries - to let 'someone else' pick up the cost of a destroyed environment.

Socialist planning - as long as it is genuine democratic planning at every level, not top-down dictates from unelected bureaucrats - is far cheaper and more efficient than the anarchy of the capitalist market.

It is a refusal to recognise these elementary facts that hobbles the United Nations and the Paris agreement. Public protest can force environmental regulation, only to be undone by a Trump election.

Only public ownership and socialist planning, which always assesses long-term environmental impacts when looking at production costs, will provide a long term solution. 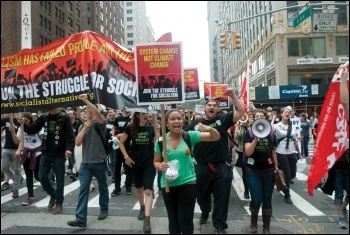 While Theresa May refused to add her signature to a protest letter to Trump signed by other EU leaders with more electoral acumen, Labour leader Jeremy Corbyn confirmed he would have signed.

In 2015, while welcoming the Paris agreement, Corbyn stated clearly that "it seems likely that the targets and mechanisms will not go far enough", placing greater emphasis on government intervention and public investment to solve the issues of climate change. This is a clear step in the right direction and is very welcome.

Unfortunately for the planet, Corbyn didn't win the general election, but should the weak and unstable government of Theresa May collapse, he should adopt a more forthright position on the immediate nationalisation of the entire energy industry (which is supported by majority of the electorate), with compensation given only on the basis of proven need.

Public ownership and a plan of production, particularly of the energy and transport system, is the only way to end this dirty, polluting system of capitalism, and plan and fund the necessary defences against rising sea levels.

But in the drive for greater public ownership, a Corbyn-led government will inevitably come up against the obstructionism and intransigence of big business. Corbyn must be prepared to respond with his own brand of determination and intransigence and replace the robber barons of the FTSE 100 with democratically elected representatives of the workers, in a plan of production that will overcome the systemic failures of capitalism.