Link to this page: https://www.socialistparty.org.uk/articles/25750 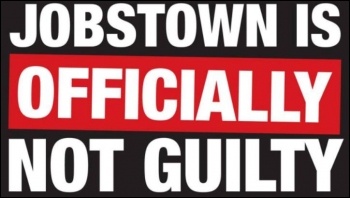 An initial statement from the Committee for a Workers' International (CWI):

In a crushing defeat for the Irish political establishment and ruling class, the jury in the #jobstownnotguilty case in Ireland found all six defendants not guilty of the "false imprisonment" of former deputy prime minister Joan Burton, during a spontaneous protest against water charges and austerity in the working class neighbourhood of Jobstown, in Tallaght, South West Dublin. 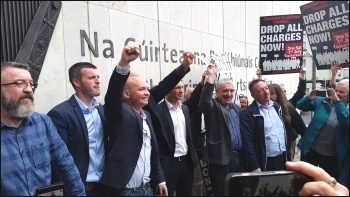 This defeat of an establishment attempt to punish the working class and socialists for the mass victorious battle against water charges is a historic victory for working class struggle as well as Solidarity, the Socialist Party and the CWI, and all others involved.

Click here to see short clips (on the CWI website - below its statement) of Paul Murphy addressing the press, following the verdict, and of Mick Barry, another Solidarity TD and Socialist Party member revealing the verdict to the Irish parliament.

The CWI would like to thank all comrades in its sections throughout the world who organised powerful international solidarity in the last months against this attack on democratic rights.

The biggest political trial in a generation in Ireland has concluded today with all defendants being found not guilty.

The trial arose from a sit down protest in front of the car of then Táinaiste (deputy [prime minister) Joan Burton. 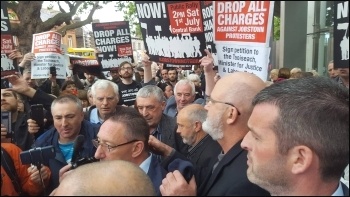 There were scenes of wild celebration outside the court with chants of 'Jobstown innocent, Labour guilty' (Joan Burton is a member of the Labour Party). Members of the police and the DPP were booed by supporters as they left the court.

The campaign will now focus its efforts on ensuring the remaining false imprisonment charges against 11 other defendants are dropped.

There are also calls for an 18-year-old who was convicted in the juvenile court in relation to the protest in 2016 to have his conviction overturned. 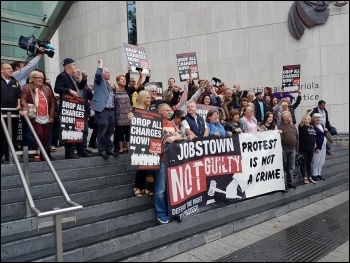 Outside the court, Jobstown trial, photo by Eugene Coppinger   (Click to enlarge)

Jobstown Not Guilty England & Wales would like to thank everyone here who supported the campaign, particularly those trade union branches and trades councils who sent messages of protest and solidarity and made financial contributions. Your support was vital in bringing this case to international attention.