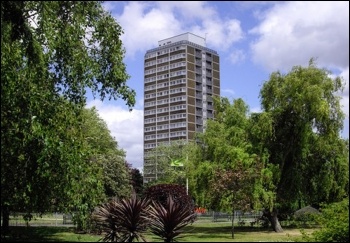 One is an engineer who believes the tower's cladding testing results are likely to come back unsafe.

Local member Steve Nally has lived in the tower for three decades. He is demanding that experienced firefighters carry out safety checks. Private contractors cannot have the same practical experience, and are suspect due to profit motives.

Steve and other Socialist Party members had visited flats to collect signatures for a letter to the housing association and council. As a result, four other residents came to our public meeting, and a fifth turned up after work. One had lost family at Grenfell.

Some remembered Steve for his work coordinating the local and national campaign against Thatcher's hated poll tax. John Reid, a Socialist Party member and RMT union rep, remarked that early poll tax campaign meetings were about the same size. By the end of the campaign, 18 million refused to pay!

There was a real mood for action. Residents there discussed organising for fire safety - but also problems with security, maintenance, service charges and rents. An organised residents' union could address all this.

Property management has been taking down posters advertising the campaign and its demands. We plan to hold a meeting in the block's stairwell to discuss demands and next steps with more residents.