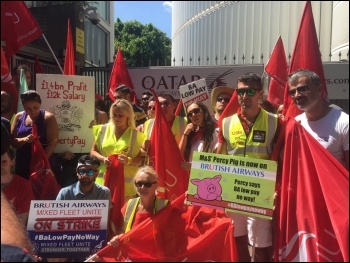 The National Shop Stewards Network (NSSN) and the Socialist Party joined the protest by striking mixed fleet cabin crew workers in Unite the Union outside Qatari Airways on 5 July, in the middle of their 16-day stoppage that kicked off a new wave of action.

Their employer, British Airways (BA), has been allowed by the Tory government to 'wet-lease' nine aircraft from the Qataris. This in effect legalises a scabbing operation by BA, which can use the aircraft and crew to get round what is becoming an increasingly solid strike by low-paid cabin crew.

It's ironic that the government's ally Saudi Arabia sees Qatar as a pariah but the Tories are more than happy to move heaven and earth to enable the company to strike-break. Unite has now launched legal action against the government for this decision.

The loud protest took place outside the foreboding high gates and fences of the airline offices in Earls Court and then moved onto the side of the busy road round the corner, where the strikers were met with huge cheers and beeps from the oncoming traffic.

The workers, who only earn a basic £12,000 a year, had negotiated an offer after taking 26 days of strike action this year.

However, in a vengeful act on top of the lost pay for strike action days, BA imposed sanctions on strikers of removing the bonus payments and staff travel concessions for a year.

These payments are worth hundreds of pounds and are a big part of how these workers bump up their low salaries. Scandalously, at the same time BA is paying this money as an extra bonus of at least £250 to those staff who are working normally. On top of this they are also paying those working up to £100 in travel money a day if they don't want to use their cars and £40 if they don't want to check in luggage for toiletries.

This is happening while the striking workers are forced to use a foodbank at their strike HQ near Heathrow. That is why the whole of the trade union movement must continue to support the workers, particularly as they will follow up this action with a 14-day strike.