Link to this page: https://www.socialistparty.org.uk/articles/25854

This is an online petition calling on Serco to pay up:

Here are some videos and a picture gallery. 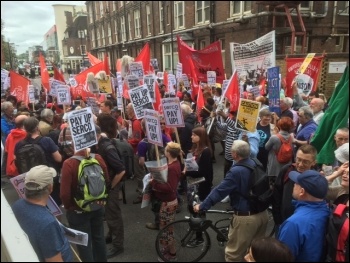 RE: request for you to intervene on behalf of low-paid workers immediately

I am writing to appeal to you to call on private contractor Serco to bring the current strike by porters, domestics, security and catering staff to an end by immediately meeting the modest demands of Unite the Union.

The union is calling for a 30p an hour pay rise for low-paid workers who are vital to the hospitals. It is unacceptable that workers playing such vital roles are forced to strike for such a modest pay rise. Supporters around the world are shocked that the biggest health trust in Britain relies for the safe-running of its hospitals on contracted workers on such low pay rates.

Last year Serco made a profit of £82 million. There is no question of them not being able to afford this modest pay rise.

The Trust aims to provide "safe and compassionate care to our patients". It is clear to us that this is impossible while Serco is showing no compassion to the low-paid staff struggling to provide these services while unable to live on the poverty pay rates.

On your website you say that you have "been working closely with our partner Serco to ensure that we have robust contingency plans in place to keep our services running and our patients safe during this time." But the strike is showing how important the role these workers play is in keeping the hospitals clean and in making sure everything is where it needs to be when it needs to be there. It is clear to hospital visitors and staff that no such plans are in place and that Serco is not fit to run our health services.

We urge you to please act immediately to bring Serco to the table with Unite to end this strike by alleviating the plight of low-paid workers. We will not desist from campaigning to back these workers.

Hospital cleaner Malgorzata Sacewicz spoke alongside striking porter and strike leader Len Hockey about their strike for decent pay at Barts trust on Channel Four on Sunday at 6:30pm. Len, who is a well-known long-standing Socialist Party member and Unite branch secretary, explained that the government's austerity is a political choice.

Unite union pickets were out in force at the Royal London Hospital in Whitechapel, east London, on Monday 17 July. It was the last day of seven days on strike by low-paid cleaners, domestics, catering workers and porters employed by for-profit company Serco at hospitals in the Barts Health NHS Trust.

The mood of the strikers remained upbeat - buoyed by their demonstration the previous Saturday at which shadow chancellor John McDonnell spoke in support (see the Socialist Party video).

Many pickets were scathing at the Tory chancellor's leaked comments over the weekend that public sector workers were "overpaid" in comparison with the private sector when pensions are taken into account (see their comments in the Channel 4 video above).

I pointed out that as a cabinet minister Hammond gets a basic salary of £141,500 a year, along with generous expenses, and a final salary pension scheme that most workers can only dream of. On a pay package worth around £400,000 in total Hammond certainly qualifies as "overpaid"!

Also, the strikers pointed out that while they worked in the public sector because of privatisation they actually worked for a private sector company. Moreover, they earned only £9.75 an hour (try living on that Hammond!) and that their pay claim for a 30p an hour increase is easily affordable by a profitable company like Serco.

The strikers made it clear that unless Serco meets their modest pay demand then they will escalate their action to a fortnight's strike.