Link to this page: https://www.socialistparty.org.uk/articles/25857

Unions must go on the offensive 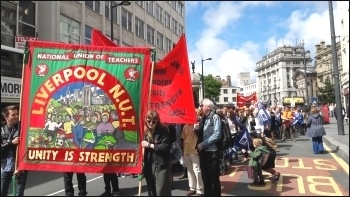 The pressure of the growing campaign against education cuts is starting to have an effect on the government.

With opinion polls showing that the threat to school budgets cost the Tories dearly in the general election, Education Secretary Justine Greening has been forced into making an announcement over school funding.

She claims to have found an additional £1.3 billion for schools over the next two years. But the extra £416 million in 2018-19 and £884 million in 2019-20 falls far short of what is needed to stop schools having to sack staff, cut the curriculum and put up class sizes.

Schools need an extra £2 billion right now just to address the real term cuts over the coming school year. This is because the government has not been funding school budgets sufficiently to meet the rising costs of pay, pensions and national insurance.

The £1.3 billion isn't even 'new' money from the Treasury but has been found by redirecting cash from other parts of the Department for Education budget. Unions estimate that the extra cash would still leave schools short by over £2 billion a year or nearly £7 billion in total by 2020.

Greening also made clear that the Tories will be pressing ahead with their plans for a 'national funding formula' which could see funds being stolen from some areas to help pay for increases in others. Further announcements are due in the autumn but this could result in further school cuts for some.

So, behind the 'smoke and mirrors' of her announcement, Greening has actually done very little to address the mounting school budget crisis. The extra funds will do little to satisfy the Heads who have been warning parents of the cuts they are having to make, nor the parents and school staff who have been campaigning together to defend education.

However, the announcement should also give school campaigners confidence that Greening and the Tories know they are in trouble. This small increase shows that, if the campaign continues to build, then the Tories will have to do better than just find spare cash down the back of the DfE sofa.

Schools and students need the funding both to fully reverse school cuts and also to address the rising teacher workloads and declining real salaries that have created a recruitment and retention crisis that is severely damaging education.

The Tories' announcement that some less experienced teachers, if their performance is judged good enough, could be awarded a 2% increase instead of the 1% that their colleagues will receive, will also only provoke more bitterness. School staff deserve a decent pay rise as of right, not divisive performance-related pay and schools need to be fully funded to pay for those awards.

Labour councils also have a responsibility to make sure school students get the education they deserve. They should agree that local authority schools are granted licensed deficits instead of having to cut staff to balance their books. That has to be part of a mass campaign of parents, staff and school students to defeat school cuts.

Teacher unions, particularly the National Education Union (replacing the NUT and ATL in September), must take a lead by building further strike action to oppose cuts and increased workload and redundancies, including doing the necessary campaigning among members to hold and win a ballot for national strike action.

Greening's announcement shows the Tories are on the back foot. Now they must be forced to make a genuine u-turn over school cuts.

'Shake the magic money tree and scrap the pay cap!'

(Called by London NUT with support from other unions)

This version of this article was first posted on the Socialist Party website on 19 July 2017 and may vary slightly from the version subsequently printed in The Socialist.