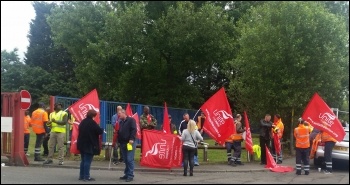 As part of our Saturday stall campaigning on 22 July, Socialist Party members in Birmingham gave out leaflets to raise support for striking Birmingham refuse workers. Not many people know that the strike is not only about pay cuts but also about jobs and safety.

The city's Blairite Labour council wants to get rid of the second loaders who take responsibility for safety at the back and side of the wagon (not non-working 'supervisors' as implied by the local paper). Instead drivers will be responsible for the safety of pedestrians, cyclists and other drivers even if they can't see them!

While campaigning, I met a street cleaner who told me that although he'd been tidying up Birmingham for 13 years, he was still on an agency contract with no holiday, sick pay and other basic rights. Agency workers on street cleaning and the bins are also bullied by management to work unsafely.

I suggested that he and his agency workmates join a union. Already, some agency bin workers in Unite have joined the bin strike. Now Unite is balloting street cleaners too, and I hope the guy I met and his co-workers also join the action.