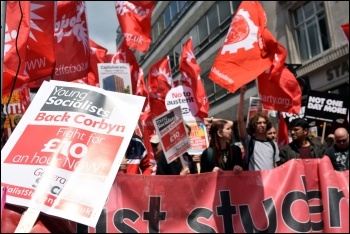 Young people in the UK have faced brutal attacks from successive governments on our living standards and our futures. The introduction of university tuition fees by New Labour, paving the way for the Tory-Lib Dem coalition to triple fees to £9,000 a year, has left those of us who want to get a degree with a lifetime of crippling debt.

Bosses exploit us with poverty pay, zero-hour contracts and in the insecure 'gig economy', further threatening the few rights we have. Housing benefit for under 21s has been axed and for most people under 35 is limited to paying for a single room in a shared house - so many young people are forced to live at their parents' home.

Jeremy Corbyn's policies have offered a beacon of hope to youth that change is possible. While not committing to scrapping student debt is disappointing, abolishing tuition fees would be a huge step forward and empower the rest of us to demand that our debts are wiped as well.

That's why the Young Socialists support his leadership and policies but will be campaigning to go further and demand the scrapping of all tuition fees and student debt, an immediate £10 an hour minimum wage with no exceptions, an end to zero-hour contracts, and trade union rights for all.

If capitalism 'can't afford' our demands, then we can't afford the profit system - that's why we fight for socialism, for the economy and society to be run by and for "the many, not the few".