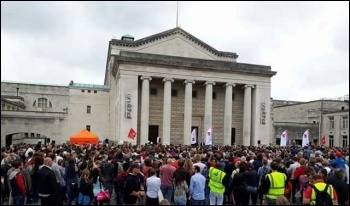 Over 1,000 people packed Guildhall square in Southampton on 15 July to hear Jeremy Corbyn. It was great to see so many young people. The RCN nurses' union was well represented and we met many angry nurses whose pay has been effectively cut by 14% in the last seven years.

Hundreds of our leaflets were handed out and people were pleased to be invited to our meeting about how we can stop the cuts. There was also a very good uptake of the Socialist paper. I personally have not sold as many in one day before!

Corbyn said that the election result was not the one he wanted but that we can take pride in the fact that the Labour vote increased by three million.

His call for the public sector pay cap to be lifted was well received by the crowd and was reflected in the enthusiasm we saw in people wanting to sign our 'scrap the cap' petition. He said that Tory MPs line up to praise the paramedics, firefighters and nurses but that does not pay the bills.

Corbyn visited Southampton Itchen as part of his tour of 60 marginal constituencies - Labour lost by only 31 votes in the election here.