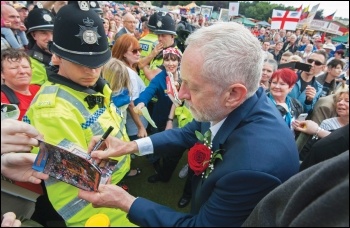 Just six weeks ago Jeremy Corbyn's leadership, and radical election manifesto, led to a historic surge in the Labour vote. In the immediate aftermath many of the right-wing Labour MPs who had attempted a coup against Corbyn only last summer were eating humble pie and falling over each other to profess their loyalty to him.

We warned then that it would be a serious mistake to believe that the Labour right would now be willing to unite behind Jeremy Corbyn's anti-austerity programme. The hostility to Jeremy Corbyn over the last two years has not been, as the right has claimed, because they thought he was 'unelectable' but rather that his programme, and the movement in support of it, represents a threat to the capitalist elite. This is the fundamental reason that the capitalist wing of the Labour Party, the Blairites, has been determined to oppose him.

A few 'ultra-Blairites', including Blair himself, have continued to openly attack Corbyn. The majority, however, are hoping to surround him and force him to step back from his anti-austerity programme. They are doing this most openly around the question of Brexit and the single market. First Chuka Umunna moved an amendment to the Queen's Speech guaranteeing membership of the single market.

The 51 Labour MPs and MEPs who supported this move signed a statement which described the single market as not being a simple free trade zone but "uniquely, a framework of rules that protects people from the worst excesses of globalisation and unfettered capitalism." This is nonsense. The EU single market was established as a result of an EU treaty signed by Maggie Thatcher; not known for protecting people from 'unfettered capitalism'! Ask the Greek working class if they feel they have been protected from its 'excesses' after suffering an unprecedented fall in living standards as a result of capitalist crisis and EU diktats.

The single market is neoliberal, pro-austerity and anti-worker. It is based on the so-called 'four freedoms' - the free movement of goods, services, capital and labour. Among its many anti-worker measures are the European Postal Services directive (used to justify the privatisation of Royal Mail), and the anti-union rulings by the ECJ in the notorious Viking and Laval cases, putting business 'rights of establishment' ahead of workers' right to strike.

The overwhelming majority of big business in Britain is firmly in favour of remaining in the single market as the best means to maximise their profits. The cooperation on this issue of the Blairite wing of the Labour Party with such 'friends of the working class' as George Osborne tells you everything you need to know about whose interests they are acting in.

Jeremy Corbyn is correct to say that he does not support Britain remaining in the single market. In response to the hysterical opposition of Labour's right wing he should go on the political offensive by making clear that the starting point of his 'Brexit negotiation policy' would be to implement policies in the interests of the working and middle class. From a £10 an hour minimum wage and the abolition of zero-hour contracts, to public ownership of the banks and the major companies that dominate the British economy - annulling every EU law that was an obstacle to implementing them.

At the same time, as he has done, he should continue to make clear that a government he led would guarantee the rights of citizens from other EU countries living in Britain. An appeal made on this basis to workers' organisations across Europe would have an electrifying effect. It would be possible to use the Brexit talks to go on the offensive against the EU's neoliberal rules and to fight for a socialist Europe.

The lessons also need to be learnt, however, from these new attempts by the Labour right to undermine Jeremy Corbyn using the issue of Brexit. Labour remains two parties in one. A campaign needs to be immediately launched to transform the Labour Party into a genuinely anti-austerity, democratic party of workers and young people.

This requires the introduction of compulsory reselection contests for MPs. The next general election could be at any time and Labour must not face another election with the majority of its own candidates opposing Jeremy Corbyn. That means MPs should have to account for their records, via a democratic process, to Labour Party members in their local area.

This should be combined with the democratisation of the party, including restoring the rights of trade unions, and welcoming all genuine socialists in a democratic federation. These measures could create a party which was genuinely able to bring together all the young people, socialists, workers and community campaigners who are inspired by Jeremy Corbyn into a powerful mass force.