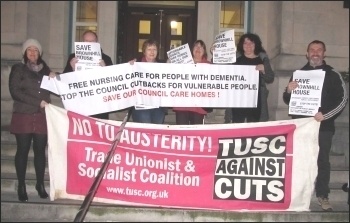 Southampton city councillors faced a lot of angry people on 19 July at their full council meeting.

On the steps outside were parents, staff and children from 'Southampton Fair Funding for All Schools' who handed in their petition demanding the council licence school deficits and the halting of school funding cuts. Inside was a deputation from Kentish Road Respite centre. Three women, all carers, spoke in defence of keeping the centre open. They praised the professionalism of staff and explained why the respite centre is so important. It provides structure and continuity, a sense of community with peer groups and opportunity to form lasting friendships. No other respite like this is available in the area.

One of those who spoke said this was another form of discrimination as the regular respite she receives allows her to work, and caring for their loved ones at home saves the government thousands of pounds.

The Labour cabinet member in response didn't even attempt to justify the closure but said they would keep up a dialogue - they clearly weren't listening.

The alternative they offered, as one of the many in the public gallery pointed out, was just a bed in a stranger's house.

The Kentish Road campaign was supported by anti-cuts councillor Keith Morrell who begged Labour councillors to reconsider and will support further action being planned to prevent the closure, as will local members of the Socialist Party.