Link to this page: https://www.socialistparty.org.uk/articles/25908 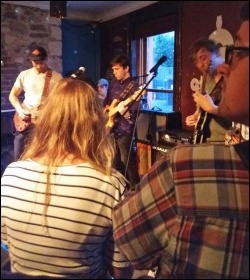 We launched Young Socialists in Cardiff at a 'justice for Grenfell' protest and found it had a very positive reception. We made speeches about how the fire could have been avoided and how we can never let it happen again.

George Godden, a young member of the Socialist Party in Cardiff, had an idea to set up a gig to raise money for Grenfell and engage people for a YS meeting. Local bands packed out the venue and Richard Edwards gave a rousing speech about Grenfell and why it is key to organise a movement.

We had sold out the venue in under an hour and had a queue formed down the street, meeting loads of new people in preparation for our first meeting on 10th July. We raised over £1,400.

Our first meeting was another success with 30 young comrades full of ideas discussing the way to take the movement forward. On 24th July we had our second meeting with a discussion on Socialism vs the free market.

Lots of those who came are doing bar work or work in the gig economy. Someone came with their Uber Eats backpack on and told us how they'd been told they should wait outside McDonalds because there was loads of demand, but in three hours didn't get any work. Someone else said they'd got a job three months ago but had only had three shifts in that time!

So we're going to hit the High Street this Saturday and leaflet places like Sports Direct where the pay is low and the work insecure. We want a £10 an hour minimum wage and the scrapping of zero-hours contracts. We've got loads of plans for campaigns and events to keep the momentum up and drive forward to a mass youth movement.