Link to this page: https://www.socialistparty.org.uk/articles/25916 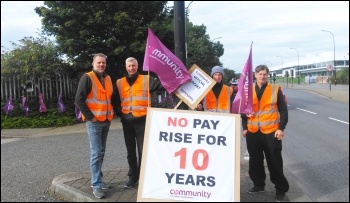 No pay rise for ten years! That's why 18 steel fabricators in Sheffield are on strike for a rise. They are members of Community union and work for Rom Ltd, one of many companies owned by Spanish steel multinational Celsa.

They started a two week strike on Tuesday 25 July, and have a picket rota covering two gates from 6am to 6pm. There's only agency staff working and they don't know what they are doing without the contracted workers.

I talked to Chris, Keith, Brian and Andy on the picket line. Between them they have worked there for 136 years! They've never been on strike before, or not since the national steel strike in 1980.

Chris explained that when the economic crisis hit in 2007 the company said: "Don't come asking for a rise for the next two years, then another two years, etc".

As the placards say: "We helped Celsa"; but Celsa has kept taking advantage by eroding terms and conditions. Brian said: "They've even take our £15 Xmas voucher, £15!"

The strikers have just heard that workers at another Rom site in Newport who were going to ballot for industrial action have had an increased pay offer to 2%. They are sure it's because the bosses didn't want two sites coordinating strike action. This has only made them more determined and they will strike for another fortnight if Celsa doesn't shift.

This version of this article was first posted on the Socialist Party website on 1 August 2017 and may vary slightly from the version subsequently printed in The Socialist.