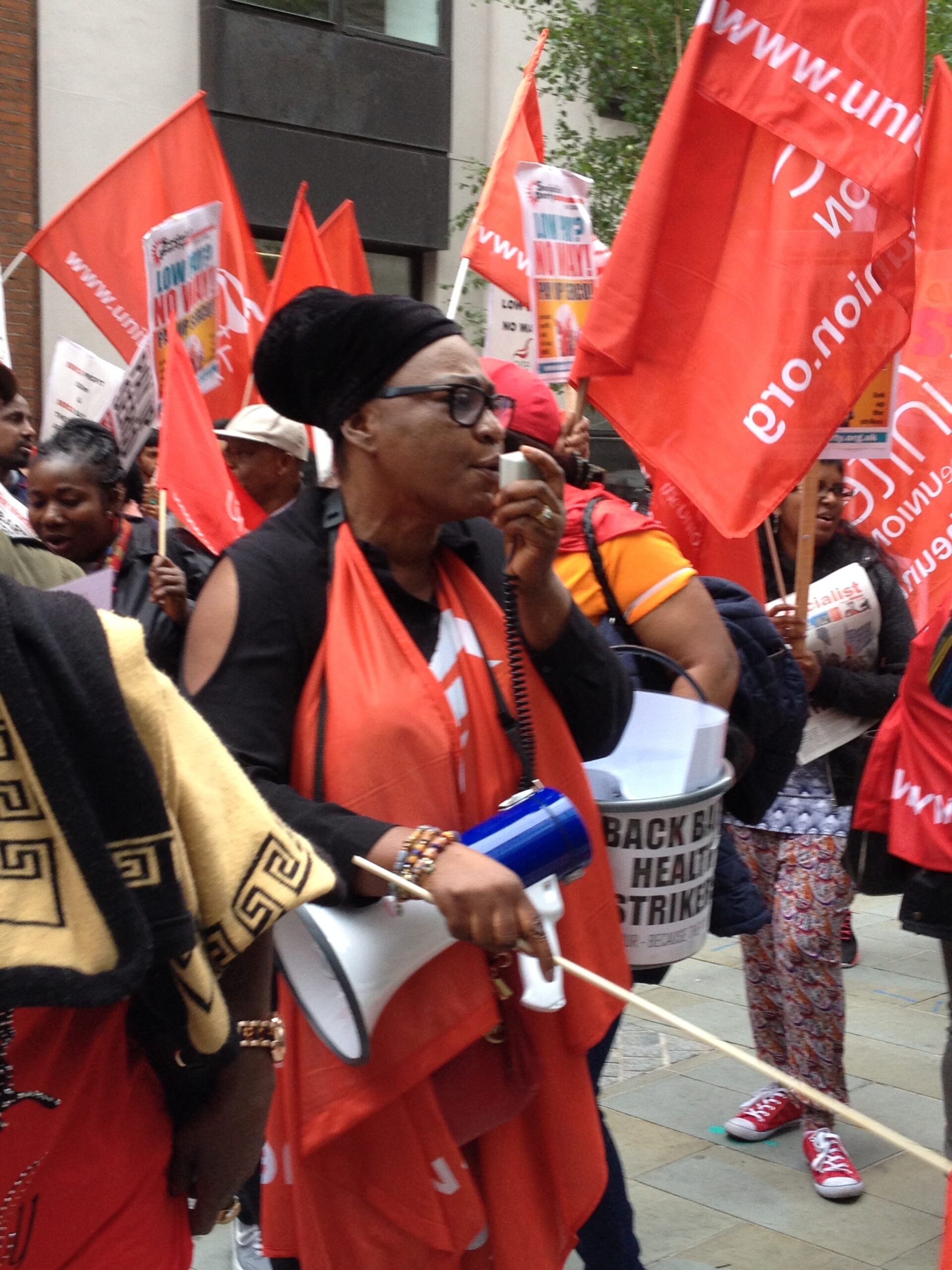 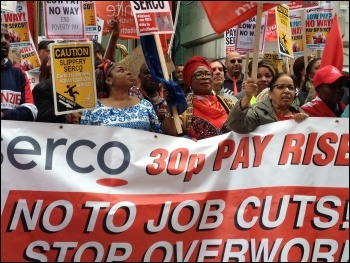 On their tenth day of a two-week strike, Barts NHS Unite members headed a lively demonstration outside the shareholders’ meeting of their employer Serco. The meeting was taking place in the London HQ of Serco’s accountants, JP Morgan. 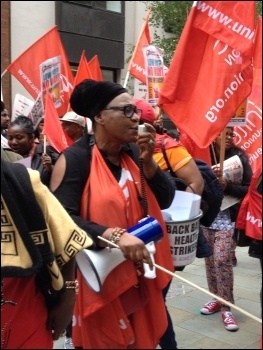 The determined Barts workers have previously also had strikes of three days and seven days in July and a 1,000 strong march through east London on 15 July. ‘Serco made a £82 million profit last year and its CEO was paid £1 million’, a Unite rep told the rally outside JP Morgan. Yet the company is refusing to give a below-inflation increase of 30p an hour.

Multinational company Serco started its Barts NHS contract in April 2017. The strikers aren’t just outraged about the refusal to give them an increase of 30p an hour, but also about the increased workload the company has imposed.

Perry, a cleaner at the Royal London hospital, said on the demo: “Initially I thought Serco wouldn’t be too bad, but they went downhill quickly. It’s the way they’ve changed things. They’ve removed a cleaner on each floor; we’ve got more work [in the same hours] – it becomes unsustainable”.
He added that the quality of work inevitably suffers too. “It’s a hospital. We shouldn’t have to cut corners, that’s the bottom line”. 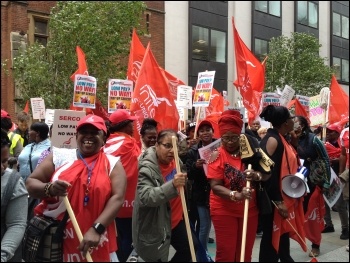 Cleaners on the demo from Barts hospital described how they now have to do demanding additional jobs for the same pay. These include cleaning medical equipment and serving breakfasts. On top of the extra pressure of this, they are suffering from a manager who is using “bullying” methods to avoid paying sick pay.

Serco’s penny pinching is clearly affecting patient safety. Barts hospital cleaners said that since the firm took the contract, cleaning products, cloths and equipment are “always out of stock”.
Their reports are shocking: For a two week period they had to use just water to do vital cleaning, and for a two month period two to three cleaners had to share one mop stick. 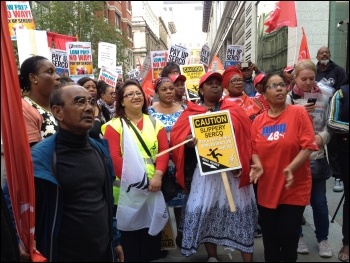 Len Hockey, Unite branch secretary for the four Barts Trust hospitals and a member of the Socialist Party, spoke at both the rallies, and also at a third outside the Bank of England. He applauded the “magnificent action so far” and welcomed the linking up of the three strikes against low pay.

“Our experiences reflect those of low-paid workers the length and breadth of Britain”, Len said. “Imagine what we could do nationally, all fighting together”. He drew attention to the need to put pressure on the TUC to lead a fight against the Tory government’s austerity, as the National Shop Stewards Network will be doing at its lobby of the TUC on 10th September in Brighton. 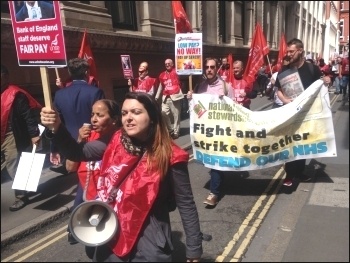 Bank of England strikers march to another site of the bank and an event attended by the bank’s governor, then back to their picket line. 3.8.17, photo by Sarah Wrack   (Click to enlarge: opens in new window)

A cabin crew representative told the rally outside JP Morgan that the crew are on their 57th day of strike action! While the parent company of British Airways reported a 37% profit increase in its last half-yearly report and the pay of executive members increased by 18%, the crew have a basic salary of just £12,194 a year. “Millions are living like this across Britain”, he said, “we’re now in a low pay emergency”. 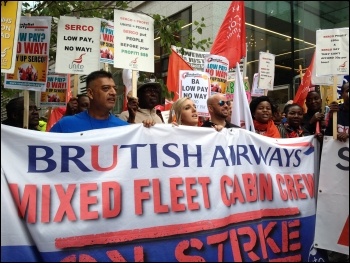 Millicent, a cleaner from the Royal London hospital made a moving speech: “Serco ignoring us is disrespectful to us. We are human – the way they are treating us is wrong. We’re just asking for 30p. Fares are going up – everything is going up – they’re adding more to our jobs, with no money”.

“More pressure – More pay!” was the demand of Susanna from Whipps Cross hospital.

Gertrude from Whipps Cross hospital summed up the mood of the day’s first rally when she said: “It’s a good demo, hopefully we’ll get a result. Otherwise we’ll do it again”. 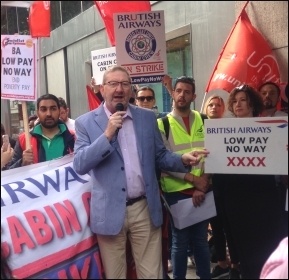 To support the Barts strike, send a message to [email protected]

Support for the Bank of England strikers can be sent to Mercedes Sanchez at Unite, 33-37 Moreland St, London EC1V 8BB and [email protected]

The Guardian carried an article on 2nd August about the Barts strike: “This is about dignity and respect”.