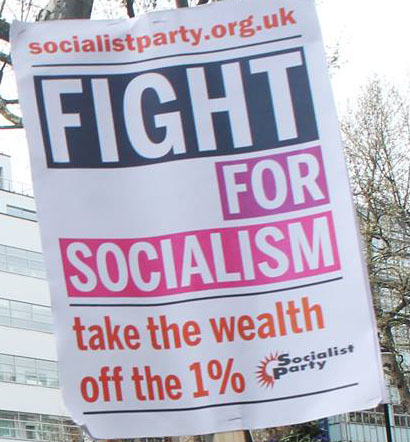 Editorial of the Socialist, issue 958 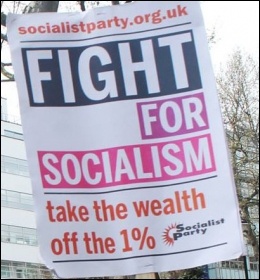 During the recent general election campaign the Tories and Theresa May, backed up by the capitalist media, presented the choice before the British people as ‘me [May] or the chaos of a Jeremy Corbyn/Labour government.’

This spectacularly backfired when May’s campaign itself descended into chaos as she was forced to repudiate the increased charges for social care and other attacks on working people!

Now, with the government hanging by a thread and another general election possible soon, there is the real prospect of a Corbyn government being pushed to power against the background of the continuing mass revolt against austerity. The Tories and the capitalist media are therefore trying to conduct a scare campaign, rehearsing the same shop-worn theme of ‘chaos’, only this time linking Jeremy Corbyn to the current turmoil in Venezuela.

‘Look: Venezuela shows that Corbyn’s policies inevitably produce chaos, food queues, rioting and the threat of disorder’, they’d like us to believe. No mention of course that the greatest cause of chaos today is capitalism itself, which they ferociously defend.

This system has generated unprecedented misery throughout the world, massive growth in the number of poor, unprecedented concentration of wealth and power in the hands of a greedy capitalist elite – with eight men controlling as much wealth as the poorest 50% of people combined. Food shortages proliferate throughout the world, including in Britain with food banks. These conditions have helped to ratchet up conflict, including war and revolution, internationally and within each country in the form of an intensified class war.

A few words of Jeremy Corbyn three years ago supporting the late Hugo Chavez and his commendable efforts to change Venezuela in favour of the poor and the working class are woven into a completely false narrative that if you challenge capitalism and its representatives, the current situation in Venezuela – chaos, they say – will ensue. Any ‘chaos’ is mostly caused by the sabotage of the capitalists, both in Venezuela and internationally, and would be replicated in Britain with the coming to power of a Labour government!

There is nothing new in this. Winston Churchill, Tory leader in the 1945 general election, warned that a Labour government would be similar to the Nazi Gestapo! Even the mild social democratic Labour government of Harold Wilson in the 1970s was threatened behind-the-scenes with military plots and army manoeuvres at Heathrow. The ‘respectable’ Economist magazine talked about a ‘Bolshevik’ threat from the government of very limited increases in corporation tax, which did not even trim the fingernails of big business! 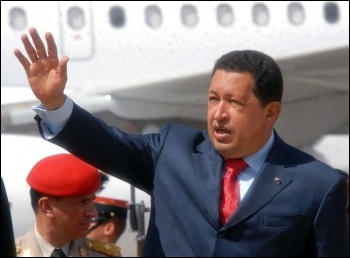 Moreover, as the excellent article by our Venezuelan sister parties of Izquierda Revolucionaria and Socialismo Revolucionario shows, the situation in the country is the result not of socialist policies but exactly the opposite – the movement by the Maduro government away from real democratic worker-based socialist policies towards capitalist ones.

Neither the government of Maduro nor, unfortunately, that of the late Hugo Chavez himself, although he did seek to carry out serious reforms in the interests of the working class and poor, has completed the incipient socialist and democratic revolution which Chavez had presided over.

That would have meant taking over, with minimal compensation on the basis of proven need, not just a minority of industry, but the commanding heights of the economy, the big monopolies, domestic and foreign, which still control the country today. This would have to be accompanied by nationalisation of the land and its distribution to the farmers and poor.

This would lay the basis for the beginnings of a planned economy, controlled and managed by the working class through a system of workers’ control and management to eliminate the stifling and corrupt bureaucratic elite. This in turn would have detonated mass movements in other countries to emulate and join up with Venezuela to create a socialist confederation of central and south America.

As the Venezuelan members’ article clearly explains, a halfway-house position – one quarter or even one third and more of a revolution – always gives the opportunity for the not yet disarmed capitalists to organise and sometimes to resort to the forcible overthrow of the government.

In the Portuguese revolution in the 1970s, the government was compelled by the mass movements which defeated the right-wing Spinola coup of March 1975 to take over, through the nationalisation of the banks, 70% of the economy. Even the Times newspaper said “capitalism is dead in Portugal”.

But this was not true, because the revolution was not completed. This, together with the mistakes by the Communist Party and sections of the radicalised army who did not decisively base themselves on democratic control from below, allowed reaction to gradually regather its forces and roll back the revolution.

Reaction, however, faced with the still hot lava of revolution, carried out a drawn-out counterrevolution in a ‘democratic’ form. Something similar is happening in Brazil at the present time and Venezuela may evolve in this way as well. Although a right-wing coup cannot be ruled out as in Chile in 1973.

Venezuela did not go as far as the Portuguese revolution in striking at the economic foundations of capitalism. Nor did a sufficiently independent working class develop which was able to put its own decisive stamp on the situation through control and management, exercised at every level. These are the real lessons of Venezuela which can be applied to Corbyn’s programme today and the prospects of a Labour government led by him.

The mood is there for real change in Britain. That was shown by the reception to the launch of Labour’s manifesto during the general election which was a real game changer. At its heart was the proposal to nationalise some industries and the promise to cancel tuition fees, including telling all those students starting in October that they would not have to pay fees!

Now, confronted with a media campaign that this could not be ‘afforded’, some Corbyn supporters have unfortunately appeared to water down the promise already, by suggesting that a ‘review’ will be undertaken to study its ‘feasibility’.

It does not need a study to understand that our youth are being crucified by this savage financial impost, which is now enormously worsened by charging higher interest rates on total fees – unbelievably up to and beyond 6% a year.

No backtracking! Make an unequivocal commitment to repudiate these unfair criminal attacks on young people, the future! How to pay for this? Introduce a wealth tax, particularly as the capitalists are piling up profits at the present time, through slave-like wages of low-paid workers like hospital workers and young people in particular.

If they say they cannot afford it, we say we cannot afford your system. What validity is there in the capitalist system if it cannot – which is now openly admitted by the defenders of the system – give the same meagre conditions as in the past? True, a record number of jobs have been created but this has not resulted in an overall growth in wages because of the scandalously low wages in Britain, the US and elsewhere.

The twin pillars of Corbyn’s election manifesto were to abolish tuition fees and the call for the nationalisation of the railways, water and fuel. There is already undoubtedly a majority in favour of these measures. This was further fuelled by the arbitrary 12.5% increase in the price of electricity by British Gas, which will further crush millions of poor people.

The Daily Mirror, for instance, carried a whole page where every letter demanded the re-nationalisation of energy and many other industries. One letter in favour of renationalisation of British Gas said in relation to the government’s ‘regulations’ that “they are as effective as a chocolate teapot”. Another stated: “I find it ironic that the man who announced British Gas price rises has the surname Conn.”

And the situation is no different in the 100 or so monopolies which now control the economy. Venezuela is at a crossroads now. A real right-wing coup is threatened because sufficient action – even under Chavez, despite his honesty and good intentions – was not taken to decisively break once and for all the power of the big capitalists and landlords through effective nationalisation of the monopoly firms and companies.

The same dilemma will ultimately confront a Corbyn government. Timing can be of the essence in politics. Failure to strike a decisive blow at the opportune moment can give big business the time to sabotage, through lies, conscious mismanagement and so on, as a means of eventually defeating proposals for nationalisation.

And even Corbyn’s current modest proposals for nationalisation propose a gradual takeover of the railways, for instance by taking over each company when its franchise runs out. It is estimated this could take seven years to complete – more than one parliamentary term – which gives adequate time for the capitalists and their press to prepare a campaign of intrigue and sabotage.

History shows – including in the drama now being played out in Venezuela – that piecemeal reforms irritate the capitalists but at the same time do not satisfy the demands of the working class for real change. The British and other ruling classes throughout the world are attempting to use Venezuela as a scarecrow to frighten the working class away from socialism.

They can only be defeated through the adoption of clear, fighting, socialist policies in Venezuela and in Britain.

We can assist the masses of Venezuela, and ourselves, by explaining similar ideas in Britain and exerting pressure on the labour movement for the Corbyn revolution to be completed, both in the internal battle to defeat the Blairite right and programmatically with measures which can really lead to a democratic and socialist Britain.