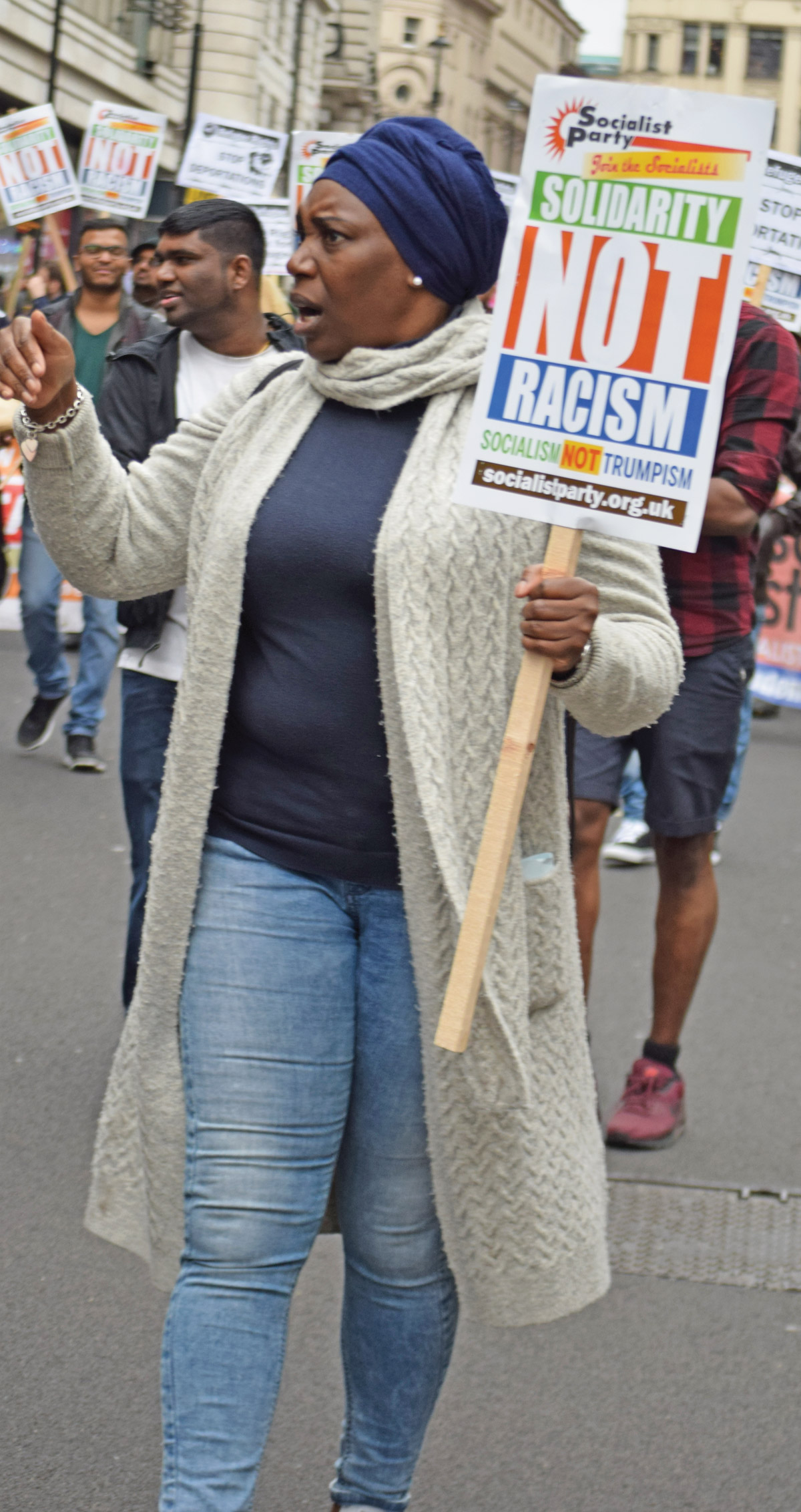 Institutional racism in the police and wider society is the product of centuries of exploitation, photo by Mary Finch   (Click to enlarge: opens in new window)

The video of the violent abuse of Rashan Charles in Hackney, east London, leading up to his death on 22 July, has rightly caused outrage in working class communities in London and beyond.

The brutal assault of a 20-year-old black man at the hands of not only a police officer but a member of the public is all the more poignant because of its immortalisation in film.

Like the video of police choking Eric Garner in New York in 2014, the three-minute CCTV recording of Rashan sums up the adversarial approach of the police to the black working class.

The gentrification project in Hackney ploughs on. Meanwhile the police act to smooth the transition of Hackney from working class suburb into high-cost playground for the city elite.

The number of black and minority ethnic people killed by police in 2017 is already the highest in over a decade. At the time of writing, campaign group Inquest reports eleven such deaths in police custody or shootings so far this year.

Edson’s family reports a doctor telling them he sustained neck and spine injuries which caused a seizure. The Independent Police Complaints Commission (IPCC) now disputes this.

The death of Rashan Charles is the fourth death in Metropolitan Police custody so far in 2017. Three were black or ethnic minority.

Meanwhile in Warwickshire, Darren Cumberbatch died on 19 July as a result of severe injuries following his 10 July arrest in Nuneaton. Some outlets are reporting an allegation that police also tasered him – nine times, according to one.

These names, like the names of all those who have had their lives ended before them, must be added to the never-ending list of black people killed at the hands of the police.

What’s followed in Hackney is an outcry of sorrow and grief. However, there is also an increasing naked anger and cry for justice, demonstrated through the spontaneous protests that have erupted in the days following.

But what cannot be ignored is the effect of austerity. In the drive to overcome the most recent crisis of capitalism, the austerity agenda has ushered in cuts to ‘non-mandatory’ services that gave young people like Rashan the help and support they may need.

In 2011 youth services in Hackney went from 181 staffed posts to 90, with a £10 million cut to their budget. In 2017 a further £4 million has been shaved off the already slender budget, with youth services provision at an all-time low across the capital.

The Socialist Party says these cuts are having a dire effect on our young people and their ability to access opportunities away from crime and contact with the police. We demand fully funded council services for all and an end to all cuts.

Rashan’s death will be investigated by the IPCC. However there is little belief in working class communities and the trade union movement that its ‘investigation’ will provide the justice we all demand.

The investigations into the deaths of Habib Ullah in High Wycombe in 2008 and Mark Duggan in Tottenham, north London, in 2011 are testament to this. So is the decades-long fight of those who lost loved ones at Hillsborough.

It is of great concern that Home Secretary Amber Rudd continues to sit on a report, commissioned following the 2015 election, into deaths in police custody.

Among other things it was meant find out whether black and minority ethnic victims are more common and suffer worse treatment. Of course, we already know this is true.

The racism that plagues police forces is institutional and pandemic. It is a product of capitalism and the exploitation of black people throughout history.

The Socialist Party demands an immediate end to police harassment, including the use of stop and search. We call for a full, open and democratic public enquiry, involving community groups and the trade union movement, to represent the views and needs of working class communities.

We demand full democratic community control of police policy and hiring. We call for the Corbyn-led Labour Party to put pressure on the Trade Union Congress to tackle the issue of institutional racism in the police force, making the link between austerity and structural racism.

We call for disbanding of the IPCC and the creation of a democratically accountable investigatory body made up of trade unionists and community groups.

But ultimately, as Malcolm X and Kwame Ture pointed out, “you can’t have capitalism without racism.” In order to end police abuse and wider racism in society, we need to end the system which benefits from it.

That means linking the fight for demands like these to the need to take the power away from the capitalists, and build a new society based on public ownership, democratic planning and solidarity: a socialist society.