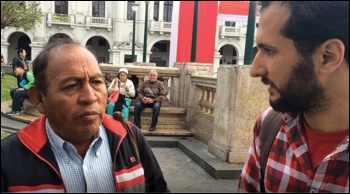 The doctors are demanding the immediate resignation of the health minister Patricia García, who has consistently attacked workers and patients, and demand that the president of Peru, Pedro Pablo Kuczynski, fulfils his election promise of increasing the health budget by 0.5% of GDP. They are also calling for cancellation of the 700 million sol (currency) debt of hospitals - which lack drugs and basic medical supplies.

The teachers' strike, which started in Cuzco on 21 July, has spread nationally. The teachers' demands are an echo of the doctors: an increase in the education budget; proper meals for students to combat endemic malnutrition; an end to unfair dismissals, which are frequent; and an end to 'hunger wages', as many teachers work multiple jobs to survive.

The struggle has become turbulent, especially in the south, with militant action being met with brutality by the police, and demonstrations in Lima being forcefully dispersed. But protesters' militancy has already produced some results, with the government agreeing to increase wages in an attempt to break the strike.