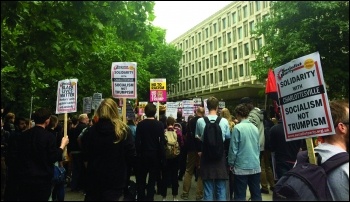 With only a day's notice, around 100 people gathered outside the US embassy in London on 15 August to stand in solidarity with Charlottesville anti-fascist demonstrators - one of who, Heather Heyer, was murdered by a neo-Nazi. Speakers from across the trade union movement contributed. A number of people in the crowd were from the US and were shocked at recent events there. Seeing solidarity being organised around the world was really impressive. Socialist Party members and our placards were prominent on the vigil. One passer-by gave £10 for a copy of the Socialist