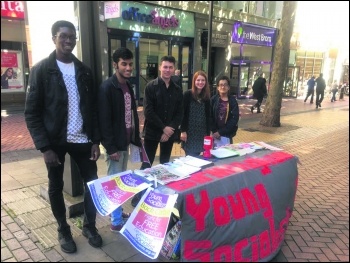 West Midlands Young Socialists hit the streets on A-level results day on 17 August to further the fight for free education as thousands of young people found out which university they will go to in September. The introduction of university tuition fees by New Labour, paving the way for the Tory-Lib Dem coalition to triple fees to £9,000 a year, has left those of us who want to get a degree with a lifetime of crippling debt.

Jeremy Corbyn's election pledge to abolish tuition fees, with the bold promise that this would be fast-tracked to come into effect from September, was one of the most attractive and popular offers in Labour's manifesto. It shows the potential to build a campaign among young people to defeat fees, take on austerity and fight for socialist change!