"We will not stop until we have ripped this decision apart!" 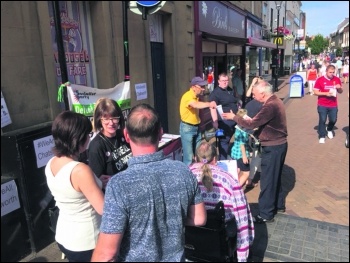 Chatsworth ward in Mansfield is a vital facility for some of the most vulnerable members of our society. This is where we as staff members come in!

We are advocates for people with life-long neurological conditions. They need a local unit that can love, nurture and support them. No other local services can replace us. We are a family in every sense of the word. And we are immensely proud of what we do!

At 3pm on 21 July we heard the sad news our ward was to close. Staff left with heavy hearts, horrified at this appalling decision. Immediately discussions turned into ideas and hope to save our much-loved ward. It was amazing how people moved forward swiftly with plans.

With our patients our priority, we formed a campaign. Current patients, ex-patients and their families rallied round.

We hold regular committee meetings, stalls to make the public aware of the true facts and are now planning for our march. We're delivering huge numbers of posters and leaflets across town.

We have destroyed every argument the trust can offer. It is clearly about saving money - targets set by a Tory government with no authority or mandate!

On 23 August the trust chief executive came to the ward. He acknowledged they had to come up with a plan before closure. November's deadline was quashed, the team won't be separated and no disciplinary action will be taken against staff involved in the campaign.

Although these are significant gains, the service remains under threat. It's been a very hard five weeks. We have had the might of the trust pressing down on us and we fight valiantly on. Mansfield has a right to this service. We will not stop until we have ripped this decision apart!

The trust hasn't realised the staff's concern for their patients take precedent over their own careers!

A public meeting was organised and the BBC brought their cameras. There were radio interviews and press releases.

Most of the staff have never been involved in a protest, never mind led a campaign! The sense of fear that they may get into trouble for organising a campaign was soon overcome.

We are currently campaigning with stalls in the town centre. The stall is popular and is gaining lots of attention. Alison's daughter has produced a campaign song.

Public support has been overwhelming. Eventually the clinical commissioning group (CCG) took the unprecedented step of requesting a meeting with the campaign. On 17 August the ward day-room was packed with staff and patients, ex-patients and families, all demanding: 'what will happen to us?' Four CCG members, including the chief executive and two trust directors, listened but had no answers.

We have destroyed every argument the trust can offer. It is clearly about saving money - targets set by a Tory government with no authority or mandate!

Courageous Chatsworth ward staff show how the NHS can be defended. Just one 16-bed ward in a three-ward hospital has forced senior management to back off from its original closure plan.

The campaign calls itself #WeAreAllChatsworth because if it closed today, somewhere else will close tomorrow. Chatsworth's stand is for the whole NHS.

Health trade union leaders, locally and nationally, must show similar commitment. Given a lead, NHS workers are prepared to fight to save their service.

One reason management wants to close Chatsworth is to transfer staff to the nearby main hospital. Years of falling pay and removal of student bursaries make it harder to recruit.

Cuts administered by bullying management and the drive to privatisation are forcing many out of NHS employment.

After the huge Health Campaigns Together demo in March and alongside the Barts Serco strikers, Chatsworth ward's stand shows there must be no further delay.

The TUC, health unions and Jeremy Corbyn must turn autumn into a campaign to defeat the government's public sector pay cap, oust the Tories and save our NHS.