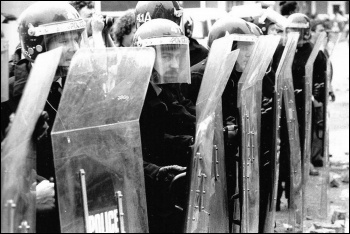 The Orgreave Truth and Justice Campaign has called a 'Death of Justice Rally' to mark the one year anniversary of Home Secretary Amber Rudd's shocking decision not to hold any form of inquiry into the infamous 'Battle of Orgreave' where 95 miners were beaten up, fitted up and locked up in June 1984.

We see it fitting that this decision was made on Halloween as we all know it's the old monsters and ghosts of the Tory party who were responsible for the injustice then, and that deny us justice now, 33 years later.

We encourage you to join us on this Halloween night to rally against the evil of the past and present!

There will be a 'zombie army', spooky samba band and circus acts to entertain the crowd, along with speakers from a wide range of campaigns plus after party!

Below is a list of ways you can help make this Halloween a nightmare for the Tories!