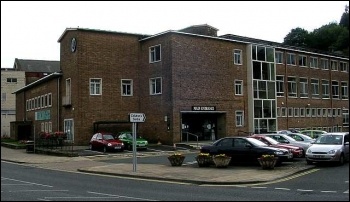 The town of Todmorden, nestling in the south Pennines on the border between Lancashire and Yorkshire, has had a community college since the 1950s.

In 2016 Calderdale Labour council announced the complete cessation of funding for the building and therefore a death sentence on a community asset that has trained and educated working class people in this town for years.

But the local authority is 'sitting' on assets of nearly £100 million. If this college ceases to exist, the nearest further education colleges will be Burnley nine miles away, Rochdale ten miles away and Halifax 12 miles away.

The community is also enraged as Aldi has applied to build a supermarket on the site.

Connected to this would be a children's centre and youth centre, provided by Aldi.

These companies know that in poorer towns they just have to suggest the potential for cash and jobs and councils cannot wait to get their noses in the trough. This also shows the further privatisation of once public services.

A campaign has been set up called Save Our College In Todmorden, which I am part of. I am also campaigning for the college to continue to be used as an artistic hub.

We will continue to fight for this essential service in a town that has some of the highest levels of deprivation.