Link to this page: https://www.socialistparty.org.uk/articles/26069 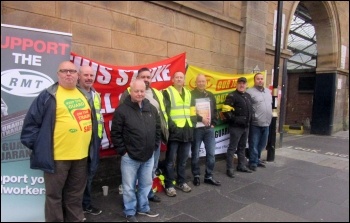 "This strike isn't about wages, it isn't about terms and conditions or pensions, it is completely and totally about safety, accessibility, security and most importantly for this strike the battle is about passenger service.

"Northern Rail have accepted a Tory government franchise specification that says at least 50% of services have to be 'driver-controlled operations', which is the new description for driver-only operations.

"Guards currently have around 30 safety and operational competencies and have to sit bi-annual rules examinations to ensure they have maintained these competencies. The knowledge they need includes evacuations of trains, dealing with fires on trains, train door failures, signalling systems, track systems, routes, and in the event of an incident or accident where the driver is incapacitated, guards are trained to step in, protect trains and other running lines and look after passengers.

"The only way we maintain this is a guarantee of a fully safety trained and operational guard on every train. I don't believe in playing fast and loose with passenger safety. But as well as these important safety responsibilities guards also have another vital role. They ensure that the rail network is accessible to people with disabilities and mobility impairments and at a time of record high levels of crime and anti-social behaviour they provide reassurance to passengers.

"At a time of increasing security threats - many security issues relate to the transport network - it is not only reckless, but bordering on criminal negligence to have a desire to de-staff trains.

"Our members are losing money to defend railway safety, accessibility, security and passenger services. I wish the train operating companies had the same agenda."

RMT members working for Arriva Rail North joined the coordinated strike action against driver-only operation (DOO) with picket lines outside Manchester Victoria and Piccadilly train stations. The strike has clearly had an effect because Northern Rail has issued reduced timetables for strike days, with trains and buses not running past 7pm! 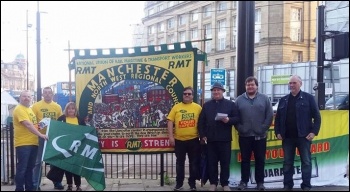 Strikers were giving out leaflets to passengers, explaining that their dispute is about safety and asking them to fill in postcards to send to their MP demanding that they oppose DOO. Many members of the public are supportive of the strike and want to keep guards on the trains, particularly in the wake of the Manchester terrorist attack earlier this year which happened next to Victoria train station.