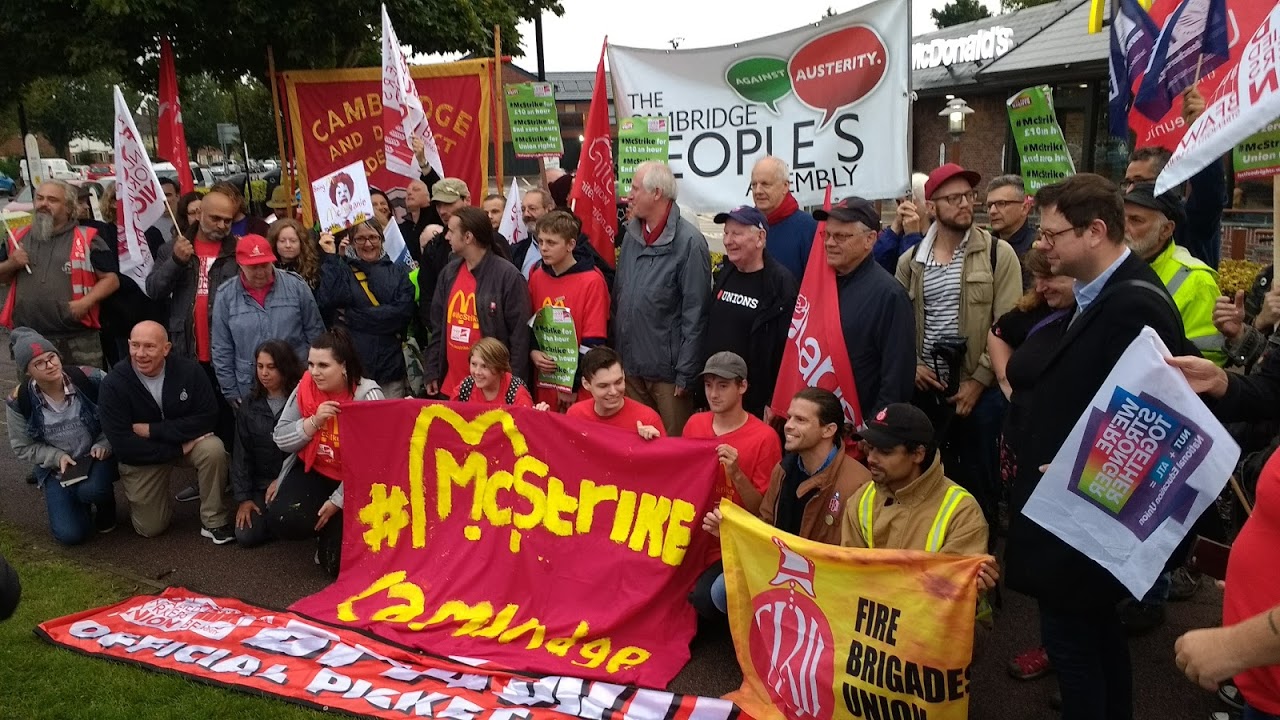 Home Workplace and trade union Historic McStrike: if we don’t get it, shut it down!
Facebook
Twitter
WhatsApp
Email
Print 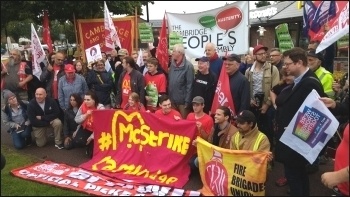 Historic McStrike: if we don’t get it, shut it down!

‘Historic’ is a word that is bandied around a lot in the labour movement. But it is a fitting description of the action taken by McDonald’s workers organised by bakers’ union BFAWU on 4 September.

The global corporation has been operating here since opening its first store in Woolwich in 1974. Workers in the nearby Crayford restaurant, along with a branch in Cambridge, have become the first McDonald’s workers in Britain to take strike action. 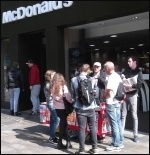 The point has been made on the picket lines and at solidarity protests that action of this kind is exactly what the working class needs. Young people organising to reject zero-hour contracts, low pay and bullying managers could mark the start of the kind of movement needed to end austerity.

The McDonald’s workers have given us a glimpse of what is possible. Workers in shops and fast food chains can and will fight. It is now vital that the example of this strike is built upon. 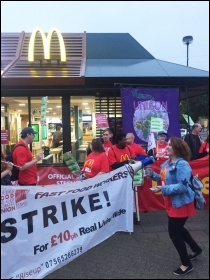 “I believe that we can win” is not a phrase heard very often in sleepy suburban Crayford at 6am. But this was the message being sent loud and clear by 15 young McDonald’s strikers.

They were joined by around 50 supporters from the local trade union movement. Shen Batmaz, one of the strikers, spoke of McDonald’s workers “all over the country ready to stand up.”

Danny Hoggan, secretary of the Greenwich local government branch of general union Unite and Socialist Party member, brought solidarity. He drove home the importance of this strike to the wider movement: “Your victory will be our victory!”

There was a lively protest outside parliament later that morning bringing together strikers and supporters from across the movement.

“Every single individual that works in that store is a beautiful, wonderful human being and they deserve more” – Tom, BFAWU shop steward and striking McDonald’s worker.

There were about 30 strikers and supporters on the Newmarket Road picket line at 6am. 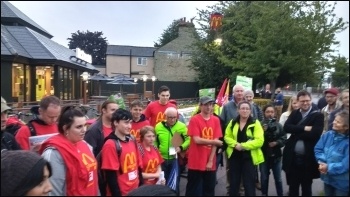 Considering the restaurant wasn’t open, the car park was suspiciously full. A small horde of McDonald’s managers descended on the store. Under their supervision we could see workers inside repeatedly cleaning the same, already clean surfaces.

Outside, spirits were high as strikers and supporters organised a lively street meeting for the duration of the picket. The energy of strikers was particularly admirable – a little bird told me they’d been up partying the previous night and were shaking up one of the world’s richest corporations on one hour’s sleep. Work hard, play hard. 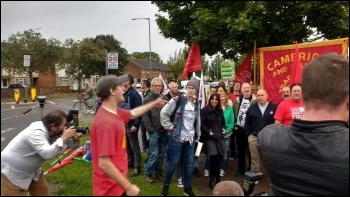 Speaking for the NSSN, national chair and Socialist Party member Rob Williams stressed the importance of bringing the struggles of low-paid workers together to smash the pay cap and end poverty pay.

Ian Hodson, BFAWU president, urged that if any striker is victimised we each return with ten friends to occupy. There was plenty of agreement.

In the words of what may become the chant of the year: “If we don’t get it – shut it down!” 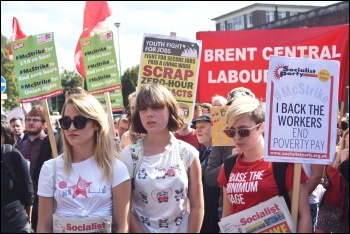 Firstly we helped organise for other striking workers – members of transport union RMT on Arriva Rail North and Unite members at Argos – to show their support for the strike.

We also organised solidarity protests outside McDonald’s in Leeds and Hull and took part in others in the region, with our activists being interviewed on local radio stations about why we back the strike. 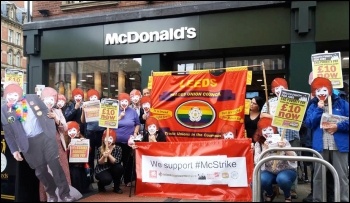 In Hull the protest was joined by RMT members straight off their picket line in the city, and former McDonald’s workers sharing their horror stories about working for the company.

In Leeds, we organised the protest alongside Leeds Trade Union Council. A number of workers from McDonald’s and other fast food companies took forms from us to join the BFAWU.

If further action is needed to force McDonald’s to pay £10 an hour and actually implement its promises on guaranteed hours, then, on the basis of our experience, we think it’s likely workers at other restaurants could join the strike.

Tremendous solidarity in Liverpool on 4 September. BFAWU members from the two stores on strike were enthusiastically supported by passers-by who joined in.

After I opened the rally on behalf of Merseyside Socialist Party, speakers from BFAWU, the Merseyside Pensioners Association, public service union Unison, Unite, the Labour Party and others all brought solidarity. 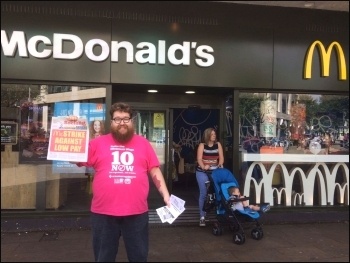 Supporters of the Young Socialists, workers and students from across south Wales descended on a McDonalds in Swansea on 2 September along with Swansea Trade Union Council.

Management made sure it was known our protest was unwelcome. But that didn’t stop our leaflets and newspapers – calling for a £10 an hour minimum wage and support for the strike – being snapped up by the mainly young, enthusiastic crowds.

On 4th September Socialist Party members were lovin’ it as they attended the very first McStrike Campaign solidarity protest held in Northumberland Street, Newcastle. This was orchestrated by the BFAWU and backed by a number of other organisations and anti-austerity activists.

This nationally coordinated action was in support of food workers everywhere and to raise awareness for the McDonald’s employees striking at the Crayford and Cambridge sites. Materials were handed out on the street, raising awareness of this struggle of underpaid workers and broadly getting their campaign message out.

A magnificently keen response was received from the public – dozens and dozens of signatures were collected and donations to the strike fund received. Many passers-by even joined in to help, expressing grievances and discontent – they themselves were the victims of low pay.

The momentum of these strikes must be relentlessly built upon, to defeat the anaconda’s grasp of greedy corporate bosses, austerity and cement real rights in the workplace for the labour movement.

This version of this article was first posted on the Socialist Party website on 5 September 2017 and may vary slightly from the version subsequently printed in The Socialist.