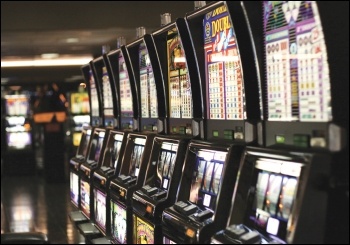 'Crack cocaine' betting machines rake in billions - but even this is dwarfed by 24-hour online gambling, photo by Yamaguchi先生/CC   (Click to enlarge)

The old adage "there's a sucker born every minute" should be updated to every 20 seconds - after Britain's gambling industry was again revealed to be exploiting vulnerable people in order to increase profits.

If readers don't know, 20 seconds is the average time between bets of up to £100 a throw on 'fixed-odds betting terminals' (FOBTs). They're the modern-day fruit machines in bookies' shops, considered the 'crack cocaine' of gambling.

An estimated £1.8 billion a year is sucked out of the wallets and purses and payday loans of mainly poor punters by FOBTs.

But the latest culprit is an online firm, 888. It has just been fined a record £7.8 million by the Gambling Commission, the state regulator, after a "technical failure" allowed 7,000 problem gamblers to circumvent blocks, access their accounts and continue gambling.

Online gambling is even more addictive - and more profitable - than FOBTs. Last year it accounted for £4.5 billion out of the industry's total income of £14 billion.

The industry likes to promote betting with images of grandad having a flutter on the Grand National or happy punters who put £1 on Leicester City to win the Premier League.

In reality the number of problem gamblers has shot up by 33% in three years - to 430,000. It's the result of easy access, extensive promotional deals and light-touch regulation. The Gambling Commission also estimates around two million gamblers are 'at risk'.

The cost to these individuals is huge - family breakup, job loss, bankruptcy, jailing and even suicide. The cost to society in health services and criminal justice is, according to the Institute for Public Policy Research, £1.2 billion a year.

Self-regulation has clearly not reduced problem gambling but governments have been reluctant to act. That's not surprising as the gambling industry has enjoyed a cosy relationship with governments and MPs.

It was Tony Blair who liberalised gambling laws in his 2005 Gambling Act and promoted super-casinos to 'create (low paid) jobs'.

In 2012 the Commons culture committee recommended more FOBTs and revived the idea of more super-casinos, despite widespread public opposition. It also blamed 'high' taxation for driving online operators abroad - instead of accusing them of tax avoidance.

The government has delayed publishing its latest report into gambling - which conveniently ignores online betting - but Theresa May is under pressure to reduce the £100 stake limit on FOBTs to £2. However, the Treasury is no doubt reluctant to take a £1 billion hit in revenues.