Rogue landlords in England get £2.5 billion a year from the government. Owners of unsafe or substandard private rental homes make the sum on housing benefit paid to struggling tenants.

The total cost of this landlord handout - including non-rogue landlords - has leapt £4 billion since 2010. On average, private landlords are squeezing 22% more rent from us than when the Tories came to power.

And how many of these shoddy pads are we forced to put up with? 1.4 million - 29% of all private rentals. Even in social housing, cutter councils have let 525,000 homes slip below decency standards.

Meanwhile, central government is trying to block even very limited landlord licensing schemes. And both Tory and Blairite local authorities continue to sell off council homes. 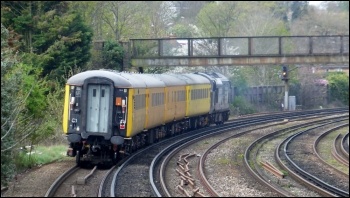 Privatised train firms suck up £50 billion more than nationalised rail, according to a new accountancy study.

Massive inefficiencies include bureaucracy in a fragmented system, costlier carriage leasing and track upgrades - and, of course, private profit.

But prices for us are going up 3.6% - to an average of £2,888 for a season ticket, says Labour. The latest outrageous hike is in line with 'RPI' inflation - while average wage growth is only 2%.

That's yet another real-terms pay cut for austerity Britain - meaning more money for the bosses.

A vice chancellor who earns £227,000 a year says his uni should pay for his house.

Craig Mahoney, head of the University of West Scotland, said: "I can't do my job properly because I'm not provided with a house.

"My job involves a lot of entertaining."

Meanwhile the poorest students in England will leave with £57,000 debt - that's £14,000 more than wealthier students.

Students in the bottom 40% of household incomes have higher costs than those in the top 30%.

Why? The Blairites introduced fees, the Liberal Democrats tripled them, and the Tories replaced the living grant with an interest-making loan.