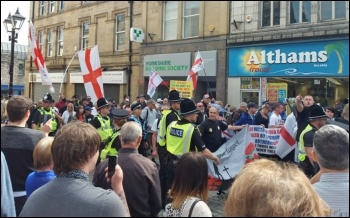 "Get out of our town and take your racism with you," was one of the messages hurled by shoppers at the small contingent of English Defence League (EDL) members trying to stage a demonstration in Keighley, Yorkshire.

The protest on 2 September was originally supposed to be one of two demonstrations that day, with EDL members set to descend on Bradford where threats of acid attacks against women wearing the Burqa have been made.

Yet the Bradford protest was called off, and the Keighley demonstration only took place due to the four lines of police separating them from angry locals. An indication of the EDL's poor state of organisation at present was they didn't appear to have a megaphone, so no-one apart from them could hear their racist message.

Around 100 people, locals and anti-fascist campaigners gathered to oppose them, while Unite Against Fascism held a similar sized protest which was kettled by the police down the road.

Socialist Party members from Bradford and neighbouring towns were part of both counter-protests, getting a good response to our leaflets linking the need to oppose the divisive politics of the far-right with clear opposition to austerity and capitalism.