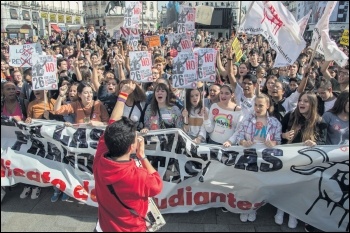 On 25 November 2016 the Spanish government of conservative prime minister Mariano Rajoy - under pressure from the large-scale student strikes of 26 October and 24 November organised by Sindicato de Estudiantes (SE - students' union) - scrapped the plans to reintroduce revalidation exams, first used under General Franco's dictatorship, and a way to discriminate against working class students.

As many students head back to university here, Gareth Bromhall of Socialist Students Wales spoke to Ana Garcia, the general secretary of SE, about this successful student movement and the lessons learned.

We've been following closely the student strikes in the Spanish state over the past year, can you tell us about the successes you have had? And the lessons learned?

In reality, last year's student strikes were only part of a bigger struggle against government attacks to destroy public education. This began in 2012 when Partido Popular (People's Party - a right-wing party) took office.

Since then we have organised 25 days of student strikes which have been very successful. We are fighting against the cuts to public education and against the government's new education laws.

These laws are based on the educational model of the Franco dictatorship (1939-75). They mean that people with little money cannot continue to study. We cannot accept such a measure which means that working class youth do not have the right to quality public education.

We had some important victories last year: we defeated the worst part of the Francoist education law, the reválidas franquistas (exams which were going to be used to justify the expulsion of thousands of students from the educational system with no qualifications).

The lessons we learned are very clear. When we unite and organise to struggle in the streets with the support of workers, we are strong enough to defeat any measure levied against the majority of the population.

That is a useful example for the working class in every sense, in every struggle: "Sí se puede" (yes we can)!

What issues have inspired these young people onto the streets and into struggle?

Working class youth who are now studying in high schools and universities have lived all their conscious life affected by a huge economic crisis. They have not experienced the 'good times'.

Everything they have known is cuts, attacks against the majority and the lack of an optimistic future. This is what capitalism has to offer us.

This is why class struggle is understood in such a natural way. We have no choice. If we don't fight there is no future for us and that is what we are seeing all around the world; in the United States, in Europe, and elsewhere. People are becoming more and more conscious of the need to change things.

In the Spanish state the struggle in defence of public education has been a catalyst for all the anger and discontent in society.

Can you tell us about the Libres y Combativas campaign?

Libres y Combativas is a new socialist feminist platform created by the Students Union and also Izquierda Revolucionaria (the Socialist Party's counterpart in the Spanish state). We launched it last March with protests and action in universities and high schools across the whole state against male chauvinist violence against women.

The results were great, much more than we expected. The key to that is the class perspective that we put forward. We cannot say that every woman is in the same situation and lives in the same way under oppression and sexism.

Working class women suffer in a deeper and disastrous way because of right-wing government cuts to public services that puts the care of the elderly, children and domestic tasks on our shoulders. Because of the super-exploitation we suffer in our jobs and because of a system which deprives us of economic independence, this creates the basis for violence against women.

Lots of women, young women and female workers are looking for a revolutionary way to change their situation and that is what we are going to do.

As students return to classes for another year, what are your goals, as an effective student-based organisation in the next period?

Our goals have not changed. We want the government to scrap all its class-based educational laws; we want back all the resources this government has stolen from our education to use it in their own benefit.

We have proven that when we fight, we win, so if the government continues its attacks on the living standards and conditions of the majority then we are going to answer with mobilisations, strikes and protests.

We are not stopping until we reach what we want: the right of everyone - it does not matter the area you live, the job your parents have or the money you have - to have a decent public education.