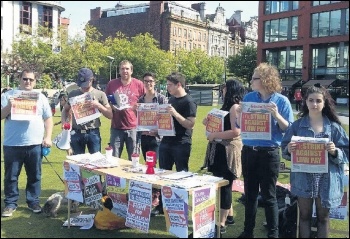 Young Socialists supporters out in Manchester, 2.9.17, photo by Becci Heagney   (Click to enlarge)

We held a Young Socialists rally on 2 September in Piccadilly Gardens, Manchester. It was to encourage young people to get more political and to sign up to Young Socialists.

Most people came over to sign the petition about university fees. People felt strongly about the issue. A lot of college students aged 16-18 came to have a chat and most people were supportive. A good start to the Young Socialists campaign!

We are now building for a huge turnout on our Young Socialists 'red bloc' contingent on the demo outside the Tory party conference on 1 October in Manchester.