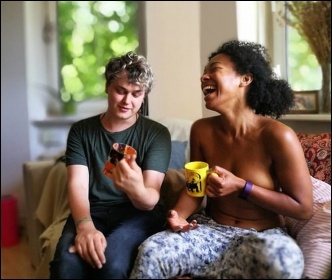 A new production, Tits, by Lily Levin and Tristan Bell, is a series of interviews filmed with people discussing body image, personal experiences and their feelings around their top halves. The Socialist spoke to Lily, producer and Socialist Party member, about the project.

"Tits is about body image. And the way that bodies are portrayed in the media. And whether that's OK or not."

The documentary, which Lily and Tristan are still working on, sees a number of people interviewed topless but without showing their faces. It includes women who have undergone mastectomy, transgender women and transgender men.

For Lily it was important the interviews took place topless, despite Facebook and other social media sites having banned images of women's nipples. "Yes, that was the point - me and my friend Tom can go walking down the street topless and I would get arrested and he wouldn't."

But the straightforward portrayal of breasts has another purpose. "They are out because it stops them being sexualised... If you are sitting there in a bra, a lacy, sexy bra, then they are more sexualised than sitting there without a bra.

There are so many contradictions in a society which both polices and sexualises women's bodies. Lily brought up Caroline Lucas's stunt in the last parliament, wearing a t-shirt saying 'No more page three'. "She can't wear a t-shirt in parliament, but they can bring in page three."