Link to this page: https://www.socialistparty.org.uk/articles/26184 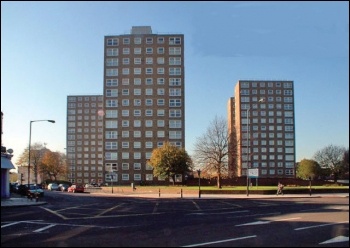 The Socialist has previously reported that the Ledbury estate in Southwark, South London, following the Grenfell Tower fire, was declared wholly unsafe by structural engineers and residents were told they may have to temporarily leave.

This was due to large cracks (which you could fit your whole hand into) in the fabric of the four 13-storey tower blocks.

The Labour council was forced into action by the revelation that the blocks should never have been installed with gas because the structures would fail in the event of explosion and, like the Newham tower block Ronan Point in 1968, lead to collapse. 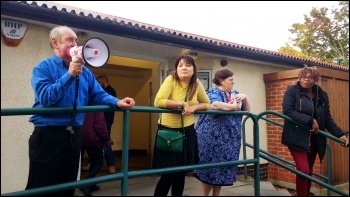 Bill: Ledbury tenants had been complaining about the cracks for over 20 years. When did you get involved?

Danielle: I have been a tenant for eight years and raised the issue with the council many times. They said there was nothing to worry about, it was down to 'natural movement' but I realised it posed significant fire risk.

On 6 June, a few days before the Grenfell fire I raised concerns. The council once again said there was nothing wrong.

It was only after Grenfell that the council took it seriously. They didn't want to; I had to call the fire brigade in, and their report gave a damning verdict (on the dangerous state of the blocks).

It was only after I threatened to go to the press did the council conduct its own investigation.

BM: What is the main demand of the tenants after Grenfell?

DG: We want safe council homes and an end to the negligence of the council.

Arup (the council's appointed building engineers) came along to look at the blocks. But we took advice from experts, who the Guardian had initially approached for comment, and on 11 July they pointed out, to both Arup and the council, that having gas installations in the building made it very unsafe.

How is it that our experts can see the problem but theirs can't? Is it incompetence or something more sinister?

BM: There were two issues, the cracks in the buildings and the unsafe gas installations. I believe there is a third one now?

DG: Yes there is now the whole question of structural viability. This is a result of the discovery that the buildings do not meet the regulations following the Ronan Point collapse in 1968.

The council cannot find the plans from when blocks were built between 1968 and 1970 and whether they live up to the regulations from that period.

BM: What will do you want if it turns out the blocks have to come down?

DG: We want to see the blocks safely fixed, that is our priority. If that cannot happen we want the land kept in the council and that the new buildings are council tenancies.

BM: What has the council said to that?

DG: Vague promises. If Arup says it's not feasible or affordable the council have refused to say what they will then do. They refuse to enter into discussions about that!

BM: What do you want if the blocks are not brought up to standard?

DG: Sam Webb (a retired RIBA architect) said the buildings cannot be safely fixed. If that is true then we are really upset.

We are now awaiting the Arup report due out on 20 November. If it says the blocks can be fixed, good. But if not then we expect the promise made by council leader Peter John to keep the land in council ownership be delivered, and that any new developments are council homes not private ones.

We have to be prepared to fight against what Peter John inferred - that a PPP (public-private partnership) arrangement would take its place. We are totally against this.

First and foremost we want the blocks fixed. If Arup says the buildings have to come down, we want a guarantee that the blocks will be replaced by council homes at council rents, with council tenants, not so called 'affordable ones' or 'housing partnerships'.

This version of this article was first posted on the Socialist Party website on 22 September 2017 and may vary slightly from the version subsequently printed in The Socialist.